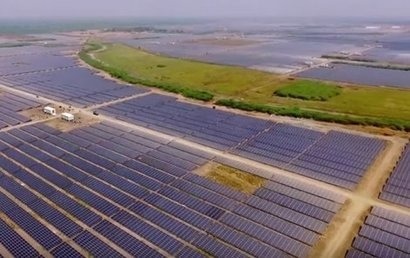 Adani Green Energy is part of the Adani Group, a globally integrated infrastructure player. The company has invested around 45.5 billion Rupees ($679 million) in the construction of a new solar farm at Kamuthi in Tamil Nadu’s Ramanathapuram region. The project is part of the state government’s ambitious target of 3,000 MW from solar power and was constructed in a record time of just eight months, using equipment and machinery sourced from around the world, employing 8,500 personnel.

“This is a momentous occasion for the state of Tamil Nadu as well as the entire Country” said Mr Gautam Adani, Chairman of the Adani Group. “We are extremely happy to dedicate this plant to the nation; a plant of this magnitude reinstates the Country’s ambitions of becoming one of the leading green energy producers in the World. I would like to express our deepest gratitude to the Hon’ble Chief Minister and the government of Tamil Nadu for their valuable support and guidance in achieving this gigantic feat”.

The massive plant is the world’s largest solar power plant at a single location and has now been connected to the Kamuthi substation of Tantransco. It consists of 380,000 foundations, 2.5 million solar modules, 576 inverters, 154 transformers and 6000 kilometres of cables.

The Adani Group is committed to revolutionising the renewable energy ecosystem of India by building solar power plants, solar parks and manufacturing facilities with seamless integration. However, its construction of the Tamil Nadu plant didn’t exactly go according to plan initially, having been affected by the round of monsoons and floods that struck southern India late last year. If anything, this makes its construction within the space of just eight months all the more impressive.