Friday, 29 April 2022
0
Robin Whitlock
Anesco has begun construction of the 49.9 MW Sutton Bridge Solar Farm, EDF Renewables’ first major solar project in the UK, which will be capable of generating renewable electricity for more than 9,800 households, and deliver significant benefits locally, including an annual community benefit fund of £20,000. 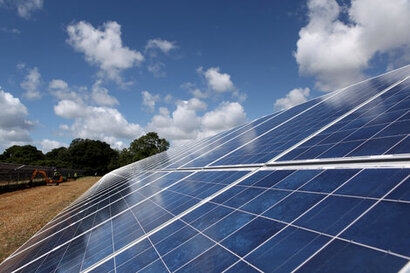 Following public consultation by both EDF Renewables and South Holland District Council, planning permission was granted in March 2021, and early-stage works have now begun on site, with generation of green electricity likely by late 2022.

“We are delighted to be supporting EDF Renewables with the construction of their first major solar project in the UK” said Anesco’s CEO, Mark Futyan. “The Sutton Bridge project will be Anesco’s largest scale project to date, representing an important milestone for the company.”

EDF Renewables’ Head of Solar, Ben Fawcett, added that at a time when tackling climate change and energy security are at the forefront of all our minds, EDF Renewables is proud to be starting work on Sutton Bridge Solar Farm, and that the company acknowledges the role that the local community plays in helping to make that happen.

“In addition to the £20,000 annual community payment, we will be implementing a biodiversity management plan, which includes planting of native species hedgerows to support local wildlife” Mr Fawcett said. “The site gets plenty of sunshine and is near to a grid connection, making this an excellent location for a solar farm.”

The 49.9 MW solar farm will save 21,681 tonnes of carbon emissions annually, and EDF Renewables is looking to install EV charging points near to site to help the local community transition to electric vehicle ownership.

Anesco has been appointed by EDF Renewables to build the site and provide operational and maintenance support. Having constructed more than 100 solar farms and 30 energy storage facilities, and with monitoring responsibilities for more than 24,000 solar sites across the UK and Europe, Anesco is well placed to take on board EDF Renewables’ first major solar project.

In addition to Sutton Bridge, Anesco currently has 360 MW of projects under design and construction across 11 grid scale solar PV and energy storage projects.