Tuesday, 25 October 2016
0
Dan McCue
A team of researchers at Clemson University in the US state of South Carolina have created a map that shows the best places in the state to build 1 MW developments. 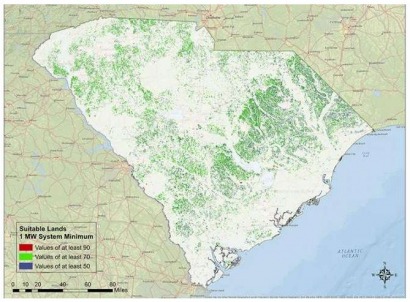 South Carolina has more than enough land suitable to generate the large amounts of solar power that would be needed to meet goals calling for all energy to come from renewable sources by 2050, according to the team led by Amanda Farthing, an industrial engineering major .

She and her fellow researchers at the university's Center for Geospatial Technologies created maps showing which lands in South Carolina would be most suitable for generating solar energy at utility scale.

To create the maps, the researchers started with a 0-100 scale on which the higher the number, the more suitable the land for development of solar facilities.

"The big takeaway is that solar presents a great opportunity in South Carolina and that it can be developed in a way that considers both environmental and social preferences," Farthing said.

The research could help South Carolina continue its explosive growth in generating solar energy, while minimizing conflicts that could arise over land use.

According to the Solar Energy Industries Association, installed capacity in the state grew more than 300 percent last year.

Suitable lands for one- and five-megawatt developments are peppered across the state, but the highest concentration is in a swath that runs from the North Carolina state line around Marlboro, Dillon and Horry counties to the Lake Marion area.

The research was published by the journal BioPhysical Economics and Resource Quality.