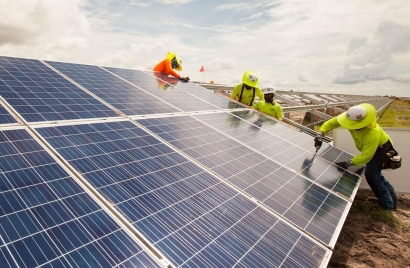 \The four new plants, which are expected to be operational by early 2019, are:

"Florida is leading the nation in implementing solar energy affordably," said Eric Silagy, FPL's president and CEO. "FPL is among the cleanest energy providers in the nation not because of governmental mandates or requirements, but because we've been committed to making smart investments in clean energy technologies for years."

Each of the four new solar plants will have a capacity of 74.5 MW for a total of nearly 300 MW. In addition to the environmental benefits, FPL's four new solar power plants are expected to produce estimated net lifetime savings of more than $40 million for FPL customers through fuel and other savings.

"I am proud to have Miami-Dade County partner with Florida Power & Light to bring clean, renewable solar energy to South Florida," said Miami-Dade County Mayor Carlos A. Gimenez. "Miami-Dade County is committed to a clean and sustainable future for all of our residents and this is another step in the right direction toward resiliency."

Known for its beaches and Daytona International Speedway (where FPL operates one of the largest solar installations at any sporting venue in the U.S.), Volusia County will soon be home to the 74.5-MW FPL Pioneer Trail Solar Energy Center.

Located near the intersection of Interstates 10 and 75 near Florida's northern border, the FPL Sunshine Gateway Solar Energy Center will give residents and visitors traveling these roads a glimpse of a major solar energy operation at work. Once completed, the solar energy center will be visible from Interstate 75 southbound and Interstate 10 westbound.

"Our beautiful state has an abundance of sun and great diversity of native plant and animal species. What is exciting about FPL's solar sites is that they are being designed to do more than just generate clean energy – they are incorporating elements in their designs that could benefit wildlife for generations," said Julie Wraithmell, executive director of Audubon Florida.