Tuesday, 10 November 2020
1
Robin Whitlock
Heating and air conditioning company Daikin has taken large strides towards making its production sites across Europe more energy efficient by investing in solar panels, with its Sakarya factory in Turkey generating almost all of its energy needs from solar. 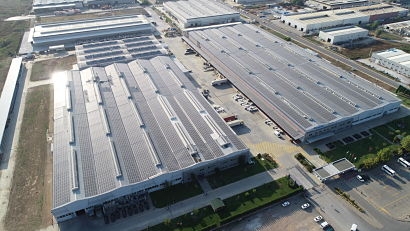 As part of its ambition to become energy neutral by 2050, Daikin Europe covered the entire roof of its production site in Sakarya, Turkey with solar panels. Together, these panels generate 7 million kWh, delivering 90 percent of the energy needs of the site, making the factory nearly energy neutral. Other Daikin factories in Europe are also benefiting from investments in renewable energy.

The installation of the solar panels required an investment cost of 3 million US dollars. Daikin Europe is convinced that investments in green energy will benefit the company in the long term, as well as the European economy and environment as a whole. The company estimates the energy gains from its investments in the Sakarya factory will pay themselves back in less than seven years’ time, with environmental benefits for years to come.

Next to its investments in the Sakarya facility, Daikin Europe is also investing in its other production sites across Europe. Notably, Daikin’s factory in Ostend, Belgium is fully supplied with green Belgian electricity. The factory in Ostend is also equipped with 2,000 solar panels and was recently awarded the ‘Factory of the Future’ award.

“If we want to become energy neutral within three decades, we need to act at all levels of the Daikin supply chain, from our suppliers to our production processes, and finally with the products we deliver” said Patrick Crombez, General Manager Heating and Renewables at Daikin Europe. “We have embarked on a long and complex journey to reduce our carbon footprint. But when I look at all of the initiatives being undertaken by our team; I am confident we will meet this goal. The production site in Turkey is an inspiring example of what’s possible when companies dare to act.”

The company also strives to motivate consumers to choose climate-friendly alternatives to traditional, fossil fuel-based heating and cooling technologies. At the same time, the company is taking action to reduce energy use at its production sites and is striving to maximise the use of renewable energy sources such as solar power.

Daikin Europe recently expressed its support for the European Commission’s Green Deal, which aims to make Europe the world’s first carbon-neutral continent. The company is confident heat pumps and other innovations in sustainable heating and cooling will play a key role in making this goal a reality.

Tags: Europe , Solar , Renewable energy , Belgium , Electricity , Fuel , heat pump , Carbón
Add a comment
Mia
I had a poor credit which was largely due to identity theft, I needed a loan to finance my business but could not get one because my credit was not just good enough, after trying everything things went from bad to worse, the more I disputed the lower my credit score went. This continued till a Pal introduced me to Lanx Credit Solution. I explained my position and they assured me that they could help me put things in order by fixing my credit and increasing my score. They kept their words, I am still in awe. I now have a credit score of 782, all the negative items that bedeviled my credit were removed finally. It was good one. Get to them on Lanxcreditsolution@gmail.com, text/call (214) 888 9709.
biogas