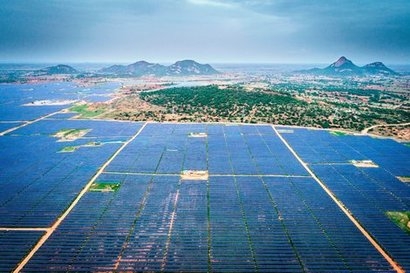 In 2016, India’s Ministry of New and Renewable Energy announced the world’s largest renewable energy expansion programme, with the stated aim of reaching 175 GW of green power generation by 2022, including 100 GW of solar power. India is making good progress on these goals, increasing solar capacity by 370 percent in three years, making solar its fastest growing energy source. The ever-increasing demand for reliable, affordable and low carbon electricity has driven a global upsurge in renewable energy resources.

The solar project by CLP India Veltoor in the southern Indian state Telangana is one of the larger solar projects in the country. This 100 MW plant, was developed by SE solar Ltd (SPV of Suzlon Energy Ltd and CLP India) and commissioned in phases starting mid-2017 and supplies energy to the Telangana Southern Power Distribution Company Limited.

The certificate confirms all relevant safety features of the solar park and demonstrates the technical compliance of the project with the globally recognised standards. Certification of the Veltoor Solar Power Project was carried out according to the service specification DNVGL‑SE‑0078 Project certification of photovoltaic power plants. This is the world’s first, and currently only, global guideline for certifying solar PV projects.

Certification of a PV power plant project according to the specification implies the overall evaluation of the asset including its design basis, design, grid code compliance, manufacturing process, transport and installation, commissioning and optionally in-service phases. Each of these phases will be closed with a statement of compliance after successful completion. The specification includes detailed description of each phase and is guiding through the certification process.

The Veltoor park highlights the global nature of modern solar projects, employing PV panels from China, solar tracking technology from the USA, and an electrical system from Europe as well as services from numerous local contractors.

“Having been involved with the Veltoor Solar Power Project since its earliest days, we are very happy to award it the first ever PV project certificate and support the fast-growing Indian solar market” said Fabio Pollicino, Director and Service Line Leader for Project Certification.

Kim Mørk, Executive Vice President Renewables Certification at DNV GL, added that the company’s global presence enabled it to call on colleagues close to and familiar with the project’s key suppliers to ensure alignment. This helped to streamline the whole certification process and enable high quality.