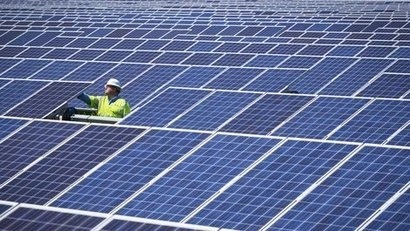 The 17 MW solar farm will occupy around 145 acres of ground at Naval Support Activity Crane, otherwise known as Crane naval station, located about 140 miles southwest of Bloomington, Indiana. The Indiana Utility Regulatory Commission has approved a settlement agreement between Duke Energy and the Indiana Office of Utility Consumer Counselor to build the solar plant. It will be the second-largest solar power plant in the state, and the largest on the Duke Energy Indiana system.

“This helps provide our customers with a more balanced energy mix using both traditional fuel sources and renewable energy sources” said Melody Birmingham-Byrd, president of Duke Energy Indiana. “We are pleased to partner with the Navy on a project that will deliver clean energy to Indiana customers, and improved energy security for the Navy.”

Construction of the facility will begin sometime this month, consisting of approximately 76,000 solar panels. It is expected to start generating energy by early 2017 and marks the second major solar project that Duke Energy is building in partnership with the Department of the Navy. The first of the two projects was a 13 MW solar farm at Camp Lejeune in Eastern North Caroline. This is now operational.

Currently, Duke Energy has more than 2,000 MW of wind and solar facilities spread across 12 states. The company’s operations in Indiana provide about 7,100 MW of owned electric capacity to approximately 810,000 customers in a 23,000-square-mile service area, making it the state's largest electric supplier. It is also the largest electric power holding company in the US with regulated utility operations serving approximately 7.3 million electric customers in six states in the Southeast and Midwest, representing a population of approximately 23 million people. It’s Commercial Portfolio and International business segments own and operate diverse power generation assets in North America and Latin America, including a growing portfolio of renewable energy assets in the United States.

In other news, the company has also announced that the number of public electric vehicle (EV) charging stations in North Carolina will increase by 30 percent thanks to its new ‘EV Charging Infrastructure Support Project’. This will also involve funding of $500,000 for the construction of electric bus charging stations aimed at both cities and towns and including both retail and wholesale customers.

Thus far company has been active in building public charging stations at parking decks, libraries and shopping areas. According to Advanced Energy, an independent, non-profit organization established by the North Carolina Utilities Commission, there are currently about 4,700 registered plug-in EVs and about 700 public charging ports spread out around North Carolina.