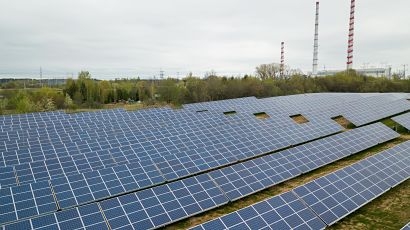 The electricity generation permit for the plant was received on Monday, after connection to an existing 1 MW plant which has been operating since the summer. This has resulted in a 4 MW solar power plant in Obeniai which is currently the largest solar park in Lithuania and the Baltic States. The total area occupied by the 4 MW solar power plant is about 5.5 hectares.

“In the spring, we installed a 1 MW solar power plant, and the customers have been using the generated “green” electricity of which since the beginning of the summer, and now we have the largest operating solar power plant in the Baltic States” said Rimgaudas Kalvaitis, CEO of Ignitis Gamyba. “We are glad that with our works we are contributing to the progress of solar energy that is finally taking place in Lithuania. With the installation of a 3 MW solar power plant, electricity produced from renewable sources could be used by 1,500 – 2,000 families. At this stage of the project, part of the remote solar power plant are available to not only to private customers but also to business customers – companies, municipalities, kindergartens, schools and everyone else who wants to use clean electricity self-produced in the power plant”.

During the second stage of development, the Ignitis Gamyba team of 16 people installed almost 10,000 solar modules within a month. Other contract work was performed by Eternia Solar, a company representing I+D Energias in Lithuania.

It is estimated that the 4 MW solar power plant will generate up to 100 GWh of electricity and reduce greenhouse gas CO2 emissions by 74 thousand tons during its entire life cycle.

It is likely that this will not be the last stage of the development of the solar farm. If the demand for remote solar power plants continues to grow, its capacity may be expanded to 6.5 MW.

The Ignitis Saulės parkai platform provides every resident of the country, regardless of whether they live in their own house or apartment, with the opportunity to purchase a part of a solar power plant from solar farms and at the same time become a remote manufacturing consumer. This is the first geographically remote solar power project in the world to operate on a national scale.

Using the Ignitis Saulės parkai platform, residents can purchase or rent a part of a solar power plant offered by any developer. In order to assess exactly what power is needed, the calculator's on the website helps to calculate the electrical power and benefits required for a specific home.

Statistics show that the platform is being used not only by residents of apartment buildings, but also by the residents of individual houses. The acquisition of such power plants is supported by the state and buyers can receive support from the Environmental Projects Management Agency.

Tags: Solar , Electricity , CO2
Add a comment
Dog Nail Clippers
I just wanted to say thank you! Joking, it was an inspiring article, I will come back to read others. Dog Nail Clippers
hydrogen