Tuesday, 20 August 2019
0
Dan McCue
It all started with a fight. In 2016, the Standing Rock Sioux Tribe was engaged in a pitched battle to stop construction of the Dakota Access Pipeline, which was set to stretch across their ancestral lands. 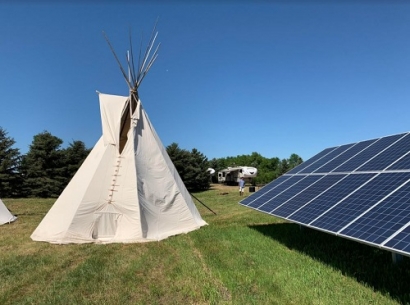 The pipeline, of course, was all about transporting oil and natural gas from the tar sands of Canada deep into the United States, extending the future of fossil fuels well into this century.

After months of protests and litigation, the tribe and its supporters, which included the actor Mark Ruffalo, actress Shailene Woodley, and Representative Tulsi Gabbard, D-Hawaii lost their battle and the pipeline was built.

But it was out of that disappointment the 300 KW CannonBall Community Solar Farm was born. Built with the financial assistance of GivePower, Empowered by Light and Jinko Solar, the $470,000 solar farm will save the Native American community an estimated $7,000 to $10,000 annually in energy costs.

Just as exciting, from the tribe's perspective, those savings and revenue generated from the solar farm will enable it to build a community center and gym, and create a scholarship program to help protect their native Lakota language.

According to Barrett Raftery, executive director of GivePower, getting involved in the CannonBall project was a natural for the organization and its staff.

"We're dedicated to bringing renewable energy to indigenous communities around the world, and we've been working on Native American reservations since 2015," Raftery said.

The nonprofit had previously done solar projects with the Navajo nation in northern Arizona, and with the northern Cheyenne in Montana. When the protests started in North Dakota, Wahleah Johns, co-founder and executive director of Native Renewables, which worked with GivePower on the Arizona project, invited its staff to visit the site of the pipeline stand off.

"They were having a lot of power issues in the camp at the time," Raftery said. "So we got involved, initially, providing smaller systems -- both portable systems and solar electric systems that could be transported on the back of a trailer so they could have some kind of stable access to energy."

While at the protest, the GivePower team met Cody Two Bears, the former Standing Rock tribal council member who then represented the area to be bisected by the pipeline.

The more they talked, the more an idea began to grow in Cody's mind. Eventually it would evolve into Indigenized Energy, for which he now serves as executive director.

But even having a motivated partner at the reservation didn't mean creating the CannonBall Community Solar Farm was going to be easy.

"One of the things that makes GivePower unique is that we don't rely on any government funding," Raftery said. "Instead we're kind of the social responsibility engine working with some of the largest solar companies in the country. In essence, we leverage the capacity of our corporate partners to make projects profitable.

"In this case, we worked closely with Cypress Creek Renewables, which is a utility scale solar provider in the U.S.," he continued. "They helped us with utility negotiation, engineering, procurement, all of the skills required to build a utility-scale solar farm.

"In short, when we're doing a project like this one, our role is linking corporate capacity to a development challenge," he said.

Because there had never been a solar farm in North Dakota, there was no renewable energy ecosystem to build on. Even drafting the PPA that would enable the local utility to purchase power from the solar farm was difficult.

"Lack of knowledge, just from a lack of experience around renewables, was a really big challenge," Raftery said.

But there was another issue: the tribal governance with which they were now dealing.

"The way the tribe functioned didn't work very well us, in terms of the kinds of things we were used to doing," Raftery said. "So we had to really figure out how to include the tribe while maintaining our independence."

One big issue that arose involved the lease necessary to install 1,060 solar panels on the reservation.

"The initial tribal resolution allowing us to do the project on their land included no term," Raftery said. "It just wasn't how they did things. But for us that was a major problem.

"In order to develop a large asset, like a solar farm, you need stability over a long period of time. With no term in the contract, any future tribal council could simply decide it didn't want a solar farm.

"So what we needed to figure out was how to do a project on the reservation but with a more traditional long-term lease that provided us with the stability we needed to feel comfortable investing hundreds of thousands of dollars in a project of that scope.

"So I think both from our side and the tribal side, we really had to navigate a variety of challenges on how to structure this thing," Raftery said.

The CannonBall Community Solar Farm is located about five miles from the site of the 2016 pipeline protests.  Now that it's been built and is operational, Indigenized Energy will be in charge of looking after it in the long term.

Raftery said that kind of local management is a must for projects like this one.

"We work on four continents and have many, many projects we own and operate, and what we've learned is that in order to ensure these projects are acceptable and impactful, you need to have local leadership and a sense of local ownership," he said.

"But remember, you're navigating in someone else’s world," he continued. "To do that successfully, you really have to understand the culture and that means you have to be born into it. We, as outsiders, can be invited into it, but we'll never understand it in the same way.

"That's why we're so happy to have Cody and his team as partners, and now they will have the autonomy to deal with the nuances of tribal government and navigate whatever obstacles they encounter as they strive to keep the solar farm going."

The solar farm is providing power to the Cannon Ball Youth Activity Center and the Veterans Memorial Building, which housed and served meals to the protestors.

“I’m really hopeful that this is a great example of Native sovereignty, and that through ownership in this project and carrying this idea forward on their own, in their own way; with their own culture; we’re really going to be able to build some kind of transformative change,” Raftery said.