Thursday, 10 February 2022
0
Robin Whitlock
Scientists at Pusan National University in South Korea have demonstrated how integrating a radiative cooler with a multi-junction solar cell can enhance its power conversion efficiency. 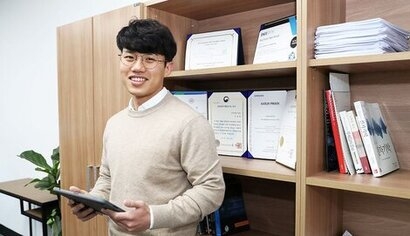 Solar cells can often become very heated while being subjected to the rays of the sun all day. Excessive heat can degrade them and lower their power-conversion efficiency. However, scientists at Pusan National University have found that integrating radiative coolers can solve this problem at low cost without energy consumption. The scientists have successfully tested their theories on what kind of solar cells work best with radiative coolers, providing novel insights for designing the next generation of highly efficient and long-lasting solar cells.

A solar cell converts light into electricity. So it’s natural to assume that the longer a solar cell remains out in the sun, the more power it can produce. However, this is not necessarily the case, because solar cells capture massive amounts of heat during the day and their temperatures typically rise to tens of degrees greater than the ambient temperature of ~25°C. The materials that solar cells are made of degrade at such high temperatures and overall, the performance of the solar cells fall.

For years, researchers have been working on ways to improve solar cell performance - their power conversion efficiency - by trying to maintain their temperature. Radiative cooling (RC) has emerged as a promising technique due to its simplicity and low cost. In RC, a micro-grating of glass, i.e. a two dimensional framework structure, is fixed onto the surface of the solar panel. The materials and placement of these gratings are such that light absorption is enhanced while heat (infrared radiation) is emitted through the atmosphere into outer space. This method has the additional advantage of not needing any external energy source to operate. Thus, RC can simultaneously reduce the temperature of the solar cell while increasing the energy input (light) for conversion into a voltage.

Thus far, research into RC as a technique applicable to solar cells has remained nascent, and the influence of type of solar cell on RC efficiency has remained to be seen.

Now, scientists from Korea, led by Prof. Gil Ju Lee from Pusan National University, have provided greater insight into this aspect. Their findings were published on 22 December 2021 in Advanced Energy Materials.

“In current solar cells, separate water or air cooling systems that require electricity to operate are needed” said Professor Lee. “Using RC can mean transitioning to a completely eco-friendly and energy-free cooling system. Our research is the first theoretical and experimental demonstration of the effectiveness of radiative-cooler-integrated solar cells.”

A theoretical scouring of a wide range of solar cell-RC combinations showed that multi-junction solar cells (MJSCs) were most effective with an RC. To verify their outcome, they performed outdoor field tests on an RC-integrated InGaP/GaAs/Ge MJSC. Under an approximately 900 Wm‑2 direct sunlight, they achieved a 6°C temperature drop, 2% increase in open-circuit voltage, and 0.5 mA increase in short circuit current, thus demonstrating enhanced cooling performance and power-consumption efficiency than conventional glass-mounted MJSCs without an RC.

“Before our study, research has largely focused on single-junction solar cells and computational evaluations” added Professor Lee. “Our study is the first to experimentally show that a more effective type of solar cell, the MJSC, benefits the most from RCs. With RC, the best kind of solar cells can be truly a renewable means of generating electricity, with long-lasting zero-energy operation, thus saving the earth’s resources.”