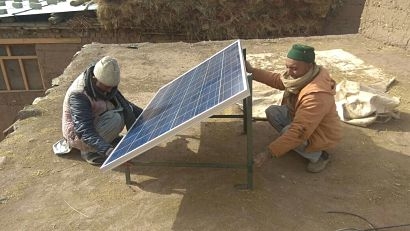 In cooperation with Global Himalayan Expedition (GHE), which leverages tourism to provide clean energy and digital education access to remote communities, REC Group contributed its solar panels that now generate energy in remote villages and schools in the Ladakh and Zanskar regions of India. Many of the communities in these sparsely populated regions have no access to grid-based power, and therefore rely on either very old solar lanterns or kerosene lamps for lighting. Thanks to the REC solar panels, every household in the villages now has basic access to energy, including LED lights in all rooms, street lights for the common areas and much better lighting in schools.

The remoteness of the regions presented a major challenge in terms of logistics. With many of the villages around four or five days’ trek distance from the nearest motorable road, the villagers themselves carried panels and the rest of the equipment to the installation sites. The 50 REC solar panels were installed on the ground and on villager’s roofs by GHE engineers.

However, apart from the initial installation, the objective is to put the villagers firmly in charge (also due to the cost of getting skilled maintenance engineers to the remote areas). The operating model is designed to keep communities independent. Three villagers from each village were trained to operate and maintain the system, and a Village Electricity Management Committee of two to three villagers serves as a single point of contact for activities related to the grid, including collecting rentals. A service centre is also setup in the nearest city to service all the grids with trained engineers.

The efforts of REC and GHE have delivered impressive results, directly impacting over 1,500 people. 12 kW of clean solar energy has replaced polluting sources: the initiative is expected to eliminate 9,000 litres of kerosene per year and 22.8 tons of CO2 emissions. 100 percent of the population now have basic energy access for lighting that is not just cleaner, but also brighter: the overall improvement in lighting in both households and schools is 500 percent. In schools, the solar installations also power computers and displays, giving students access to offline internet content as well as interactive video content and TED talks. Schools already report a 30 percent increase in the learning aptitude of their students and their knowledge of basic concepts.

“With this and other initiatives, we are making our contribution to one of the United Nations’ 17 declared goals on sustainable development” said Steve O’Neil, CEO at REC Group. “Goal number 7 unequivocally commits ‘to ensure access to affordable, reliable, sustainable and modern energy for all’.

In its own COP21 study, REC Group has shown how solar energy can make a significant contribution to limiting the global temperature rise. However, for the 1.5°C target, the global ramp-up of solar installations has to be up to 9 times above recent forecasts. The company remains committed to providing renewable energy that is not just clean, but also flexible enough to meet energy needs in off-grid locations that rely on decentral power generation.