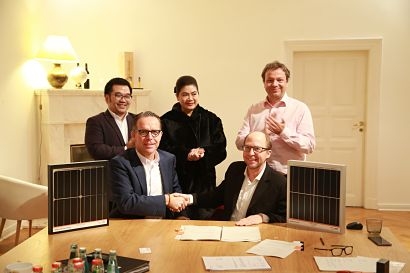 Solarwatt is working on the project with Aone Deutschland AG, the investor and operator of the plant, located on the outskirts of the Vietnamese capital Hanoi. Saxony's Minister of Economic Affairs Martin Dulig personally lobbied for the implementation of the project, bringing together Leipzig-based Aone Deutschland AG, a developer of sustainable and efficient infrastructure projects, and Solarwatt, based in Dresden. Long established in home and business markets, Solarwatt is also increasingly active in utility-scale solar PV projects.

Delivery of the modules is to take place in February/March 2020 with installation of the system later in the year. Aone CEO Alexander Redeker and Solarwatt CFO Sven Böhm signed contracts for future cooperation in December. Aone Deutschland AG is already planning an expansion of the Song Duong waterworks and its solar PV system, which could increase its capacity to as much as 10 MW according to Mr Redeker.

While energy in Vietnam historically comes mainly from hydropower and coal, renewable energy is expected to increase significantly.

“Hydroelectric power plants have almost reached peak output, so wind and solar plants will become much more important in Vietnam” said Sven Böhm. “We are very pleased to be part of this landmark project with our modules. As project developer, Aone Deutschland decided to cooperate with Dresden-based Solarwatt in order to keep the entire installation process as simple as possible.

Germany is an important trading partner with Vietnam and business relations between Vietnam and Saxony specifically date back many decades. Even in the days of the GDR, many students and skilled workers from Vietnam trained in Saxon companies and universities. Many Saxon companies have retained long-term cooperation with Vietnam and continue to implement projects there. Financing of the Song Duong waterworks photovoltaic system was undertaken by Stadt- und Kreissparkasse Leipzig and Bürgschaftsbank Sachsen.