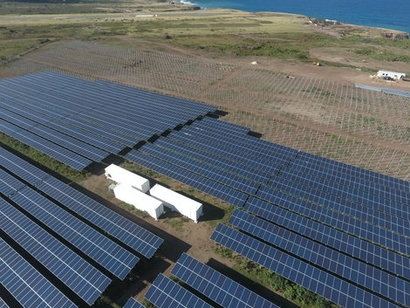 In March 2016, SMA Sunbelt commissioned a 1.89 MW solar PV and 1 MW/572 kWh Lithium Ion (Li-Ion) battery energy storage system on the Caribbean island of Sint Eustatius. The objective of the retrofitted renewable energy plant was, and is, to reduce the diesel consumption of existing diesel generators on the island, thus generating savings on both energy bills and the islands carbon footprint.

Large-scale hybrid systems are rather complex and for island utilities it is difficult to fully assess the outcome of hybridizing their diesel power plants with solar power plants on fuel consumption. They typically rely on the calculations of the manufacturers or on rather costly third-party studies. In the case of Sint Eustatius, data analysis by Dr Thomas Hillig Energy Consulting (THEnergy) over the plant's first year of operations found that the performance of the plants exceeded the forecasts. The share of solar energy on the island energy mix was higher than predicted for the first year of operations. Relative diesel savings were 3.4 percent higher than forecasted: diesel consumption was reduced by 62 l/MWh instead of 60 l/MWh.

These additional savings are particularly remarkable as solar irradiation during the year was 4.9 percent below average due to local weather conditions. Even the total savings in diesel were in line with those forecasted. This is also reflected in the slightly higher than expected performance ratio of the solar PV plant.

The analysis also shows positive findings for battery performance. While a degradation of 4 percent was expected, the actual degradation after the first year was 1 percent. It is realistic to assume that with normal weather conditions, and the extremely low degradation of the battery energy storage system, the future performance of the plant will be even better than during the first year.

The outstanding results of the new system convinced the island utility to expand the plant in the near future by adding 2.25 MW of solar power, and 4.4 MW / 5.2 MWh of battery energy storage.

“We are fully convinced of SMA Sunbelt, which is particularly important, as in this next step we will switch off our diesel gensets during sunny days and will fully rely on renewables” said Fred Cuvalay, CEO of Stuco.

Commenting on the project, Thomas Hillig, the Managing Director of THEnergy, added that large PV-battery diesel hybrid plants are still relatively new. On islands in particular, the reliability of the supplier is a key success factor in that bad planning and technical issues may lead to huge consequential costs. This means that the Sint Eustatius project will act as a signal to other islands of what can be achieved by integrating renewable energy into their energy system.