University of Hyderabad converts its campus to green energy

Tuesday, 04 July 2017
0
Robin Whitlock
The University of Hyderabad (UoH) has installed a new solar PV system as part of its programme of converting the university campus to green energy. 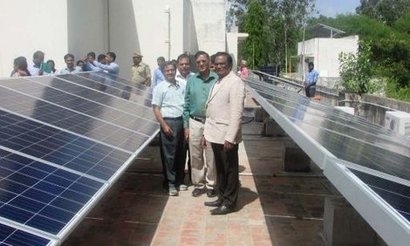 UoH has installed 1000 kWp of solar PV which is expected to cater for 50 percent of the electricity demand from the buildings on the university’s North Campus, generating savings of 15 percent from the university’s power bill. The new solar system was officially inaugurated on 29th June by Sri D. Ramakrishna Rao, Deputy Secretary (Central Universities) of the Indian Department of Higher Education, in the presence of university Vice Chancellor Professor Appa Rao Podile and other senior officials.

The university has an ambitious programme of installing solar PV to cover 100 percent of its needs, covered by a net metering policy.