Wednesday, 19 October 2016
0
Robin Whitlock
Yealands Wine Group has just installed 918 photovoltaic panels at its iconic Seaview Vineyard in Marlborough to bring the total number of PV panels on its winery roof to 1,314. 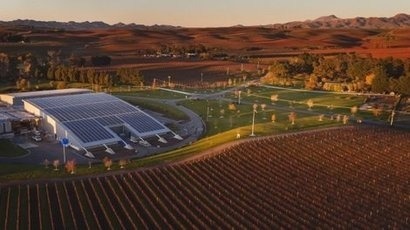 This means the vineyard is now capable of generating 411.12 kilo Watts of solar power – the equivalent to powering 86 New Zealand homes - while offsetting 82 tonnes of CO2 emissions. The solar installation is part of the company’s continued effort to reduce its reliance on the national grid for energy.  It will generate 30 percent of the winery’s average electricity needs from tank cooling and powering pumps to running presses.

Last year, Yealands reduced its electricity consumption from the grid by 10 per cent and CO2 emissions were reduced by 90 metric tonnes. The new installation is expected to cut the winery’s carbon footprint by a further 82 tonnes annually, with an estimated 505,000 kWh of solar energy forecast for the first year. The solar panel installation took a six person team four weeks to complete.  The panels were installed on the northern side of the winery’s roof to ensure optimum solar energy capture throughout the day and allow for the maximum number of panels to be installed.

“We already had a pretty substantial solar array in place, but it takes a lot to power any kind of building and a winery’s no different” said Peter Yealands, Founder & Principal. “By increasing the size of our solar array we will decrease our reliance on the national grid and generate 30 percent of the power we require to power our tank coolers, computers, you name it.  I've always been passionate about renewable energy and also about self-reliance.  We have been carbon neutral since inception but that doesn't mean we can just sit back.  Our new solar panels will further help reduce our carbon emissions and keep us true to our claim of being the most sustainable winery in the world.”

The Yealands installation was made possible through PowerSmart GOLD which allows companies to buy locally produced solar power without actually having to own the system.  CEO of PowerSmart Michael Bassett-Smith said that the company aimed to work with likeminded companies that are forward thinking and innovative.

“When Yealands approached us for help to improve its already energy efficient vineyard we were keen to assist these pioneers in renewable energy” Mr Bassett-Smith said. “We’re very proud of what we’ve achieved with this project using PowerSmart GOLD- the finished solar system looks fantastic and we’re excited to have installed the largest solar PV system in New Zealand yet again.”

PowerSmart is the company responsible for designing and installing the next two largest solar power PV systems in New Zealand at Sylvia Park Mall (355kW) and Tarewa Mega Mall (240kW).