Thursday, 21 November 2019
0
REM
The Bui Power Authority recently completed Ghana’s first micro-hydropower plant, the Tsatsadu Generating Station, under the Ministry of Energy’s renewable energy initiative. The plant, situated on the Tsatsadu Waterfalls in the Hohoe District of the Volta Region, has a capacity of 45kW with the possibility of adding another 45kW capacity turbine in the future. 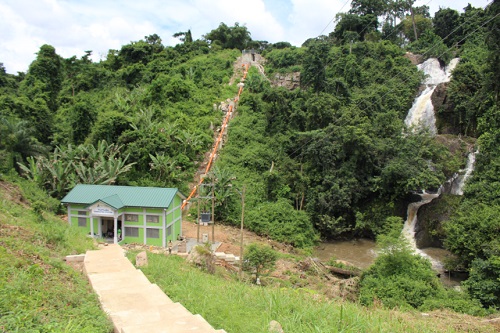 The run-of-river scheme will not require the formation of a reservoir. It consists of a concrete diversion weir, an intake structure, diversion channel, a forebay, steel penstock, a powerhouse and a transmission line to tie the electricity generated into the national distribution grid. The weir diverts part of the river flow through an intake channel into the diversion channel. The diverted water goes through a 300mm diameter penstock to the base of the hill where the powerhouse, which houses the turbines and the generator, is located. The water drives the turbines and flows out through the tailrace channel and into the downstream of the waterfall.

The project, that, according to GhanaWeb.com, required a total investment of $400,000, received much of its funding from the BPA, which also received $80,000 from the RETT (Renewable Energy Technology Transfer), project initiated by the United Nations Development Program (UNDP). The project has also received support from the Danish government.

The Ministry of Energy in 2005 entered into a Memorandum of Understanding with the United Nations Industrial Development Organization (UNIDO) and International Network on Small Hydro Power of China (IN-SHP) to undertake studies to develop the existing small hydro power potentials in the country. The Tsatsadu Waterfalls, located at Alavanyo Abehenease in the Hohoe District of the Volta Region, was selected to be developed as a pilot project. UNIDO subsequently donated a 30kW Turgo Turbine and associated electromechanical equipment for the project. The Ministry of Energy appointed the Bui Power Authority in 2016 to develop the Tsatsadu Micro Hydropower Project on its behalf. BPA then reviewed all available information on the project. This included site assessment surveys, detailed topographical surveys and the development of engineering drawings for the project.

The project, which was initially designed as a 30kW stand-alone system was upgraded to a 45kW grid-connection system. The Ministry of Energy directed the BPA to constitute a technical committee to implement the project. The committee comprised representatives of the Renewable and Alternate Energy Directorate of the Ministry of Energy; the Energy Commission; the United Nations Development Program – Renewable Energy Technology Transfer (UNDP-RETT) Project Implementation Unit and the Electricity Company of Ghana (ECG).