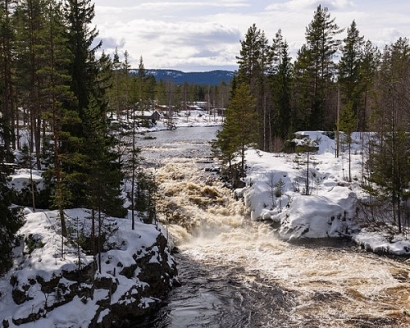 Thordon’s involvement in the project followed the retrofit installation in 2013 of its water-lubricated bearings to the slightly larger Noppikoski plant, also in Sweden. Both refurbishment projects were overseen by ČKD Blansko Holding, the largest turbine manufacturer in the Czech Republic.

Greg Auger, Thordon Bearings’ Hydro & Clean Power Business Unit Manager, said, “When we were first approached by ČKD Blansko to supply the new turbine guide bearing for the 1967-commissioned Noppikoski turbine, we were faced with a particular design challenge:  the Francis turbine is connected to the generator by a 45m long shaft supported by seven individual bearing positions. The scope of the project was so extensive it made sense for ČKD Blansko to replace all of these bearings to achieve the best control of shaft position and vibration.”

Based on the success of the retrofit and subsequent five-years of seamless operation, Fortum and ČKD Blansko specified a similar scope of supply for the Vässinkoski plant, which also operates a 1967-commisioned Francis turbine and generator.

“Aside from the obvious environmental advantages, the Thordon solution provides for a longer operating life and, due to the unique tapered keyset design, optimizes in-service maintenance since the SXL polymer can be removed without having to split the bearing’s metal housing,” added Auger.

Commenting on the installation, Jan Piroutek from Eribos, Thordon’s distributor for Czech Republic and Slovakia, said, “We worked closely with the OEM on the final design and material selection and supplied the SXL bearing with a bronze tapered keyset along with an SXL axial seal ring.”

Working with ČKD Blansko to help design and build all the metal components, the companies were able to use parts of the original bearing casing but replaced the rubber element with the Thordon SXL polymer. During assembly, the bearing was submerged in liquid nitrogen at -196°C (-321°F) to ensure a perfect fit into the housing, but this meant engineers had only about ten minutes to install the bearing in its housing.

The Vässinkoski and Noppikoski hydropower plants, both located on Sweden’s Oreälven River, each operate one 10MW vertical Francis unit rated at 333rpm and connected to the turbine runner by a 45m long