Thursday, 23 January 2020
0
REM
A plan to transform Corwen into one of Wales's greenest towns with its own renewable energy scheme fed by locally-generated hydro and solar power systems has won the support of residents. 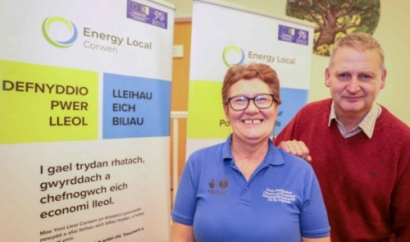 The Corwen Energy Local project is scheduled to go live in April and aims to sign up 60 households to switch to low-cost, eco-friendly power, much of it produced on their own doorstep.

The plans were confirmed at a well-attended public meeting called by South Denbighshire Community Partnership at the town's Canolfan Ni when it was confirmed that 48 homeowners have already registered interest in the project.

The principal source of local power will come from Corwen Hydro - the town's hydro-electric power plant fed by the Pen y Pigyn reservoir - but the numbers expressing interest include several with their own solar power systems.

These include SDCP itself which, with funding from the National Lottery Climate Action Fund, has installed 24 solar panels on the roof of Canolfan Ni and SDCP Chief Officer Margaret Sutherland, said, "We have worked with national umbrella organization Energy Local Cic that Wales is proud to have  kick started and who have a similar scheme running in Bethesda.

"But really the roots of this project were put down seven years ago when local people had a vision that water could be piped from the reservoir above town on Pen y Pigyn to alleviate flooding and provide an energy source.

"The plan now is to form an energy co-operative to benefit from the scheme and I'm really pleased at the response here where we have had a lot of people asking good questions and showing interest in signing up.

"This is an area blighted by households experiencing fuel poverty who often use electricity pre-payment meters and very often find themselves paying the highest rate. As the scheme expands, this can help them.”

The principal source of that energy is the Corwen Hydro Project which produced power on all but three days of 2019 and when that power is being generated households in the scheme will pay just 8p per kilowatt hour of electricity.

That is in contrast to normal peak rates between 7am and 8 pm which vary between 18p and 22p per KwH and Joel Scott, a director of Cowen Hydro, said, "Projects like this make it far more viable in future to do more hydro schemes. As long as the hydro scheme is generating electricity then the people in the scheme will be paying less than even the cheapest basic rate of 10p per KwH and any excess income can be spent on community benefits so it will be a win-win for the community."

When the hydro scheme isn't generating then members of Corwen Energy Local will be supplied with electricity by Octopus Energy which receives all its supply from renewable sources.

Octopus will also install a smart meter in each of the 60 households to provide information every half hour on where the supply is coming from so residents can choose to switch on washing machines and dishwashers when Corwen Hydro is generating and the cheapest rate is being charged.

Roger Hayward, from Corwen, a trustee of SDCP, said, "I was very impressed with what I heard. I went there quite open-minded but I was so impressed that I've signed up and also signed up a neighbor.

"I really like the idea that you capture water in the mountains above Corwen and use it to generate electricity.

"It's fantastic that people have put their own money into the Corwen Hydro Project not to make money but to benefit the community by making use of our natural resources."