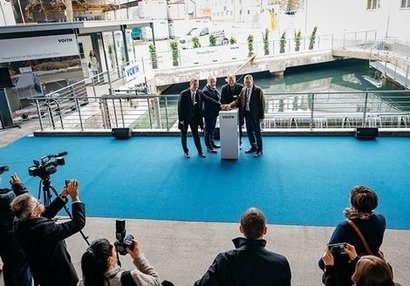 The hydropower plant generates energy from the River Brenz. It consists of a compact, environmentally-friendly turbine generator unit that will not only generate electricity for the factory but will also serve as a demonstration plant for customers, employees and interested members of the public.

The ‘Alte Bleiche’ plant was officially launched with a symbolic press of a button on 24th March. It has an installed capacity of 35 kW and will generate up to 286,000 kWh of renewable electricity per year for the Voith production facility. This is roughly equivalent to the annual consumption of 100 households. The plant is equipped with the StreamDiver, a new turbine-generator unit developed by Voith that was designed specifically for river plants with low heads and is thus ideally suited for the Heidenheim location on the Brenz. It is an oil-free submersible turbine that enables a standardised and cost-efficient plant concept that minimises impacts on the environment during the installation phase.

The plant was installed into an existing weir system of the Brenz. In cooperation with the Technical University of Munich an ecological solution for a so-called shaft power plant was developed in which turbine and generator are installed in a concreted chamber in the riverbed. By utilising existing dam structures and eliminating the need for a power house, the facility could be built very cost-efficiently. In addition, the power plant does not cause any noise emission and has minimum impact on the natural scenery.

Most of the existing dams worldwide have not been used to generate energy so far. In Germany alone, only 7,400 of the around 55,000 dams are used as hydropower plants. In North and South America, Southeast Asia and Africa there is also great potential for small hydropower plants. The StreamDiver has been designed as an economic and ecological solution to utilise this untapped hydropower potential.

“The small power plant ‘Alte Bleiche’ is another excellent reference facility for the StreamDiver” said Uwe Wehnhardt, CEO of Voith Hydro and Member of the Corporate Board of Management. “This compact, submersible turbine has already been used successfully for many years in Sweden and Austria. Other projects in Peru, Indonesia and the USA will go on stream at the end of 2017 or early next year”.

An important aspect of the ‘Alte Bleiche’ project was the extensive involvement of Voith technical apprentices, who participated in the design, manufacture and installation of the turbine and also took care of the control cabinet assembly. Students from the Cooperative State University Baden-Württemberg were deployed on project management and engineering tasks. According to Erwin Krajewski, Head of Voith Apprenticeship, the project is a major interdisciplinary project for the company’s apprentices who contributed significantly to the success of the project. This in turn reinforces the company’s position as an attractive training company.