Zinc Mine Reopens With Help From Low-Cost Hydropower

Wednesday, 13 June 2018
0
REM
Empire State Mines, a zinc mine in St. Lawrence County, New York, has officially reopened following a comprehensive $33 million investment by Titan Mining Corporation, which has created more than 200 jobs at the site, exceeding the firm's commitment to the state. The Empire State Mines project is being directly supported with a four-megawatt allocation of low-cost hydropower from the New York Power Authority's St. Lawrence-Franklin D. Roosevelt Power Project in Massena, New York. 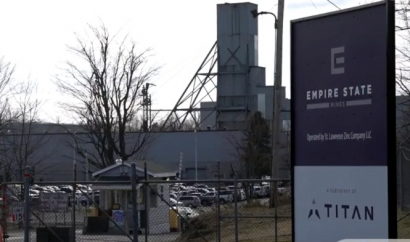 "Job creation continues to be one of New York's top priorities and the reopening of Empire State Mines will provide an economic driver for the North Country for years to come," Governor Andrew Cuomo said. "Our ability to allocate low-cost power to this project was crucial to its completion, and ultimately helped us to bring hundreds of skilled labor opportunities to the region."

In addition to low-cost power, NYPA also provided $330,000 in funding as part of a $1.2 million Empire State Mines program to train up to 60 local workers as certified underground miners. NYPA also provided the mine's restart with a $500,000 loan from its North Country Economic Development Fund, which is administered by the Development Authority of the North Country.

Empire State Mines is part of a mining district that first began production more than 100 years ago and produced more than four million tons of zinc contained in concentrate. The 2,700-acre zinc mine ceased operation in 2008 due to low zinc prices, but is now starting to produce again. The primary uses of zinc are for galvanizing steel, die-casting alloys and brass castings mainly for construction, transportation, and infrastructure.

Gil C. Quiniones, NYPA President and CEO, said, "Titan Mining has been committed to re-opening this century-old mine and NYPA's hydropower and economic development funding allowed for the perfect marriage to get it done. This is a big win for the region, creating more than 200 jobs, and NYPA is proud to have been a partner in this venture every step of the way."