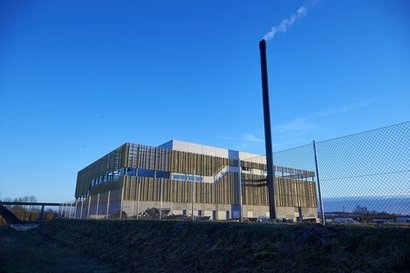 The facility is ready to produce both sustainable power and heat with the help of the new system. Located in the town of Brønderslev, it is part of a plan to set new standards for cost-competitive renewable heat and power production.

The new facility combines several energy technologies to produce both heat and power. It is the first combined heat and power plant in the world to integrate concentrated solar power and a biomass boiler while also using Organic Rankine Cycle to turn the energy into district heating and electricity. The aim is to deliver record energy efficiency, lower energy prices and a solution that is no longer dependent on fluctuating fossil fuel prices.

The new facility, Brønderslev Forsyning district heating plant, was inaugurated on the 19th of March by the Danish Minister of Energy, Utilities and Climate, Lars Christian Lilleholt, the Danish Minister for Taxation, Karsten Lauritzen and  the Chairwoman of the Board at Energy Technology Development and Demonstration Programme, Ann-Dorthea Larsen.

“The CSP technology is capable of supporting the production of pretty much any energy outputs, be it heat, electricity, cooling, process steam or even desalinated water,” said Jes Donneborg, Executive Vice President, Aalborg CSP. “That is why our corporate strategy has been focusing on learning from our existing projects and optimizing this technology as a result. Soon, we will be able to deliver the next generation of this type, and reduce the gap between renewable and conventional fuel prices on a global scale”.

The advanced solar energy plant provided by Aalborg CSP covers 26,929 square metres of ground and is a solar-thermal system based on concentrated solar power. It has been producing heat since late 2016 and has now been joined by the ORC and biomass units, thereby enabling the facility to produce electricity as well. The CSP unit consists of 40 rows of U-shaped mirrors that collect sunlight throughout the day and reflect them on to a receiver pipe. This in turn is surrounded by a special glass vacuum tube inside of which is a thermal oil that is heated by solar energy to temperatures of up to 330°C. The heat is used to drive an electric turbine to produce electricity. However, the system is also flexible enough to provide lower temperatures for district heating. The solar energy system can alternate between providing combined heat and power at peak price periods, or exclusively deliver heat.