Wednesday, 01 August 2018
0
Dan McCue
Abengoa and Acciona, through a consortium formed for this purpose, have signed a contract to complete the construction of the Cerro Dominador solar thermal plant in Chile. The consortium, led by Acciona Industrial with a 51 percent stake, will be responsible for building the solar thermal plant. 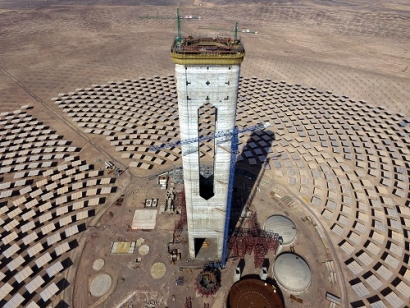 The plant, owned by Cerro Dominador, a company of EIG Global Energy Partners, will have a capacity of 110 MW and will be the first of its kind built in Latin America.

The solar thermal tower plant will join the 100 MW photovoltaic plant built by Abengoa which has been in commercial operation since February of this year. Both will form a renewable energy complex with a total capacity of 210 MW.

This project will generate clean and dispatachable energy 24 hours a day thanks to its thermal storage system with molten salts. The solar field, of 146 hectares, has 10,600 heliostats that will concentrate solar radiation onto a receiver which is 252 meters high.

Cerro Dominador complex is located in the commune of María Elena, in the Atacama Desert, in the Antofagasta Region, an area with one of the highest solar radiation rates in the world. The plant that Abengoa and Acciona will build will produce clean energy that will prevent the emission of 640,000 tons of CO2 per year. In total, the complex is projected to avoid 870,000 tons of carbon dioxide emissions every year and will deliver clean energy through a 15-year energy purchase agreements with distribution companies, signed in 2014.

The construction of Cerro Dominador is anticipated to have an impact on local development, with the creation of more than 1,000 jobs in the area during its construction peak.

Abengoa will act as the technological partner of the engineering and construction project. The company has more than 30 years experience in the field, having developed and built plants with an installed power of 2.6 GW worldwide, which currently represents the 38 percent of the installed capacity worldwide. Currently, it is the technology partner and participates in the construction of phase IV of the largest solar complex in the world in Duba at the Mohammed bin Rashid Al Maktoum Solar Park, owned by Dubai Electricity and Water Authority (DEWA).

Acciona has built 10 solar thermal plants worldwide with a total capacity of 624 MW and is currently working on the construction of Kathu plant (100 MW) in South Africa. Cerro Dominador is the fifth solar thermal plant that the company will build outside of Spain.