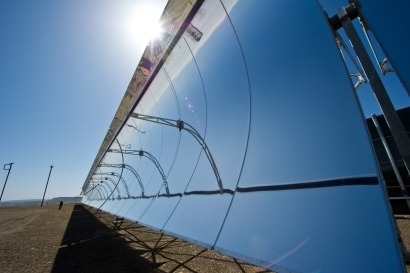 CSP consists of a family technologies that operate through the concentration of solar energy through large mirrors which is then used to drive a conventional steam turbine for electricity generation. The project is expected to deliver an annual energy production of 525GWh and will be sufficient to power 200,000 homes.

“CSP is one of Eskom’s first utility scale projects outside of the existing hydro portfolio and it puts us on a path towards reducing our carbon footprint and investing in a sustainable energy future” said Eskom Chief Executive Brian Dames.

The AFD is co-financing the plant together with the African Development Bank, Clean Technology Fund (CTF), European Investment Bank (EIB), KfW (a public law institution in Germany) and the World Bank.

“The leveraging of finance from institutions like AFD will contribute to the country’s low carbon trajectory and commitment to climate change” added Ayanda Nakedi, Eskom’s Senior General Manager for Renewables. “The CSP project will pave the way for industrial development and job creation by promoting the localisation of this technology. This further cements our relationship with the AFD and we are delighted to journey with this institution as we deliver on our mandate.”

Eskom’s acting Chief Financial Officer, Caroline Henry, said that AFD has been a key contributing factor to progress made so far on the project and that in total the organisation has concluded €200 million in credit facility agreements towards these two projects. The two concerns have worked together before. In 2011 they signed a €100 million loan facility for the financing of the Sere wind farm near Vredendal in the Western Cape.

The AFD is a bi-lateral development finance institution that works on behalf of the French government. Its mission is to finance development according to France’s Overseas Development Assistance policies. AFD operates in more than 60 countries and has been operating in South Africa since 1994 through its Johannesburg regional office