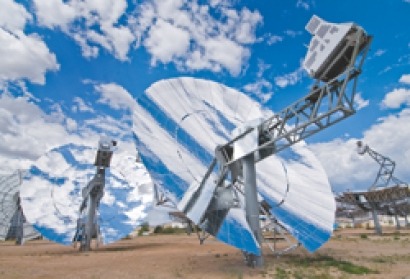 The two technology partners were recently selected as finalists in a US Department of Energy R&D project, SunShot: Concentrating Solar Power, which will identify system requirements and accelerate implementation of MHD technologies and prototype development.

“Solar MHD power generation represents a breakthrough in CSP technology. It is a new, more efficient way of generating electricity by utilising higher temperatures. It is more efficient for this reason and the fact that MHD utilises no moving parts except for the flow of the ionised gas through a magnetic field. This is accomplished through breakthroughs in heat pipe technology, microchannel cooling and permanent super conductive magnets, heliostats and materials,” Thomas P. Kay, founder of Concentrating Solar Power Utility, explained to Renewable Energy Magazine recently.

Much of the technology behind this system has already been patented by Kay and two Rensselaer Polytechnic Institute professors, Douglas B Chrisey and Yoav Peles. Some of their joint work was, in turn, based on earlier MHD patents held by Kay himself.

“In developing this technology, the use of the extremely large superconducting permanent magnets will improve efficiency, and this is even more so when combined with the micro-channel cooling process developed by Professor Peles,” explains Chrisey.

“We are delighted to partner with Concentrating Solar Power Utility,” said Ron Kudla, executive director of the Office of Intellectual Property, Technology Transfer, and New Ventures at Rensselaer. “This is an excellent example of progress under The Rensselaer Plan in the area of clean energy and technology transfer that demonstrates Rensselaer’s unique strength in its ability to translate scientific discoveries into practical application.”

“My hopes and visions for this technology are thousands of solar MHD utility scale power plants throughout the world. Solar MHD will usher in a new age for concentrating solar power,” concludes Kay, who is one step closer to realising his dream of developing an innovative and cutting-edge solar energy system thanks to the new license agreement.

Office of Technology Commercialization at Rensselaer