Tuesday, 05 April 2011
0
A team of researchers at Arizona State University in the US have concluded that the addition of minute graphite nanoparticles into the heat-transfer oils normally used in solar thermal power plants increased the heat-collection efficiency of the liquid by up to 10 percent. 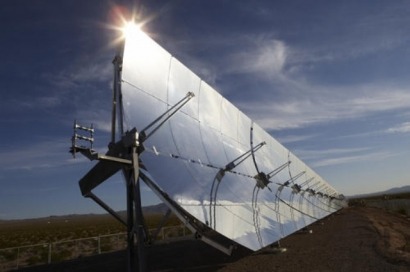 Team leader Robert Taylor, a graduate student in mechanical engineering at Arizona State, said based on these findings, “we estimate that this could mean additional revenue of up to $3.5 million (€2.4 million) per year for a 100 MW solar power plant.”

The team was inspired to do the study by the one perceived weakness of solar panels –that they can use only a fraction of the sunlight that hits them.

The rest just turns into heat, which actually hurts the performance of the panels," Taylor said.

An alternative that can make use of all of the sunlight, including light PVs can't use, is the solar thermal collector.

The purpose of these collectors — which take the form of dishes, panels, evacuated tubes, towers, and more — is to collect heat that can then be used to boil water to make steam, for example, which drives a turbine to create electricity.

Taylor and his colleagues have mixed nanoparticles chose to add graphite nanoparticles to the mix, in part, because they are black and therefore absorb light very well, making them efficient heat collectors.

At the same time, graphite nanoparticles "are cheap," Taylor said —less than $1 per gram—but with 100 grams of nanoparticles providing the same heat-collecting surface area as an entire football field.

"It might also be possible to filter out nanoparticles of soot, which have similar absorbing potential, from coal power plants for use in solar systems," he said. "I think that idea is particularly attractive: using a pollutant to harvest clean, green solar energy."

The team’s research appears in the current issue of The Journal of Renewable and Sustainable Energy under the title, Applicability of nanofluids in high flux solar collectors.

The Journal of Renewable and Sustainable Energy