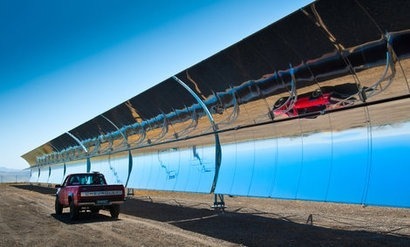 The 5 billion Rand Bokpoort project has been developed by a consortium led by ACWA Power. The South African Trade and Industry Minister, Mr Rob Davies, and the Kingdom of Saudi Arabia’s Minister of Commerce & Trade, Dr. Tawfig Fawzan Alrabiah, officiated at the site. The project will provide enough power to supply more than 200,000 homes and was developed as part of the South African government’s Renewable Energy Feed in Tariff (REFIT) Procurement Programme. It will contribute significantly to the government initiative to augment much needed power capacity, attracting foreign direct investment and creating jobs while stimulating the country’s economy.

The project is equipped with over nine hours of thermal storage capacity and operates like a giant rechargeable battery. Its unique utility-scale storage system allows the power plant to feed over 200,000 South African households with electricity during the day and night. Bokpoort CSP is utilising the only reliable renewable technology available to South Africa today at a commercial scale to cover the country’s daily evening peak demand from 5pm to 9pm which is crucial for increasing sustainable supply for Eskom, the South African public electricity utility.

The tariff offered by ACWA Power at the second procurement window was 12 percent lower than the cap set by government for CSP technology at that round, in line with ACWA Power’s mission to deliver reliable power at the lowest possible cost. This in turn contributed to the economic development of South Africa and the social welfare of its citizens.

“The formal inauguration of the Bokpoort CSP plant is a significant milestone in supplying South Africa with reliable and cost competitive renewable electricity” said ACWA Power Chairman, Mohammad Abunayyan. “The success of the project demonstrates a robust partnership between the Government of South Africa, through the Department of Energy, and ACWA Power. We see this as the start of an enduring partnership with South Africa to augment the foundation for economic growth and social development.”

Chris Ehlers, the company’s managing director for the Southern Africa region added that ACWA Power is operating in South Africa to serve the nation and contribute to its development. This has been demonstrated by the 2 billion Rand worth of locally-sourced components made in the country that have been used in the construction of the plant and resulted in the creation of 1,300 construction jobs. Furthermore, in addition to sharing 5 percent of the ownership of the business venture with the national non-profit organisation LoveLife, ACWA Power has also committed 5 million Rand to date in providing education and training for people from the local community and improving social infrastructure in the area.

ACWA Power is headquartered in Saudi Arabia and is a developer, investor, co-owner and operator of a portfolio of power generation and desalinated water production plants with presence in 12 countries, with an investment value in excess of  $32 billion, generating 22.8 GW of power and producing 2.5 million cubic metres per day of desalinated water.

Bokpoort CSP plant is the first in a series of investments in the power sector that ACWA Power is making in South Africa. The company is expecting to commence construction on the 100 MW Redstone CSP Project, also in Northern Cape, and is awaiting the outcome of tender submissions for a 300 MW coal-fired plant in Mpumalanga and another 150 MW CSP plant also at Northern Cape.

The Bokpoort CSP project has been highly recognised throughout the industry, recently being awarded the title of African Community Project of the Year at the African Utility Week Industry Awards as well as Project Finance ‘Deal of the Year’ by PFI, and World Finance’s Solar Deal of the Year.