The ins and outs of DNI data for CSP development 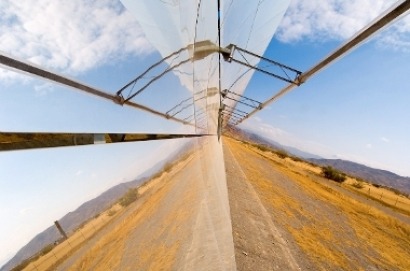 When it comes to CSP project evaluation, one of the biggest uncertainty factors for the performance is the available Direct Normal Irradiance (DNI) at the site. To this end, the German company, Suntrace offers five recommendations in its first tip tip to ensuring data is used correctly by plant developers:

1. DNI vs. GHI: DNI distinguishes significantly from GHI (Global Horizontal Irradiance), which is more applicable for Photovoltaic projects. GHI includes direct and diffuse radiation, while DNI only considers the direct beam, which can be concentrated by mirrors. DNI intensity is strongly diminished by clouds, water vapor and aerosols such as dust, pollen, soot particles etc., while GHI is less influenced. Therefore variability of DNI in space and time is much higher than for GHI and data are also more complex to obtain. DNI can be measured on the ground by means of specific measurement devices or derived from satellite data. While clouds are relatively good to recognize from the satellites perspective, it is difficult to distinguish for example a sandstorm from the desert underneath. That said, obviously measurements at the ground should deliver the better data. But the sensor must be reliably calibrated and carefully operated. Typically long-term data from DNI ground measurements are not available in CSP project locations, thus satellite data are the first choice to evaluate the solar potential of one site.

3. What is the basis for uncertainty of the various sources?: DNI is highly variable in space and time; small changes in the state of the atmosphere have a strong influence on attenuation of direct irradiance. Satellite-derived data usually have a higher uncertainty and differ by a certain degree from the real irradiation. Different processing algorithms and input data lead to differing results. Ground-measured data from pyrheliometers or pyranometers might be affected from bad calibration, wrong sun tracking, soiling of the instruments, etc. Many years of historical data leverage out the effect of inter-annual variability and lead to reduced long-term uncertainty.

4. Conclusion: How to handle the differences in values?: Instead of focusing on one single source, even the most reliable looking one, several sources should be used. These data should be combined with ground-measured data, as far as available. This is the most reliable method to calculate long-term best estimates. Credibility of the final result will be strengthened with every additional data set of sufficient quality. A quality weight applied to each data set generates a best estimate out of the different sources.This weight needs to be based on the experience of an expert, who can also reflect the length of temporal coverage and the representativeness of a satellite data set for a site.

5. Rule of Thumb: As a rule of thumb regarding uncertainty of DNI, the following can be stated:

• Up to +/- 5% when combining ground-measured data and site-specific

In the next top tip, Suntrace looks at why energy yield in India is so much higher than in Spain, when both countries boast similar DNI values.

When it comes to solar irradiation in India, everyone would expect this to be better when compared to Spain, for example, says Suntrace. With respect to the Global Horizontal Irradiation (GHI), which is relevant for photovoltaic projects, this is certainly the case. With regard to DNI, which is relevant for CSP projects, annual DNI is also almost comparable, with values in the range of 1900-2100 kWh/m2a.

Main assumptions for the comparison:

• Identical DNI of 1950 kWh/m2a for both locations: An individual year with an identical annual sum for DNI in both locations was used for the calculations.

• A standard performance simulation tool for CSP plants was applied.

“One would expect at first glance that the annual electricity yield of both plants would be approximately equal,” says Dr. Richard Meyer of Suntrace, but he goes on to reveal that DNI frequency distribution for the locations in Spain and India reveals that a location in India accumulates more hours with moderately high DNI values. While in Spain, high DNI values are only reached in summer.

Suntrace concludes that “as rule of thumb, energy yield at a location in India could be >20% above a location in Spain with the same average DNI”.

Suntrace will be speaking at the 2nd Concentrated Solar Thermal Power Summit India this April (12 – 13) in New Delhi. CSP Today are offering “Tech top tip” exclusive discounts of $50 when registering for the event. Jut quote: “SUNTRACE- TTT” when registering online at www.csptoday.com/india.