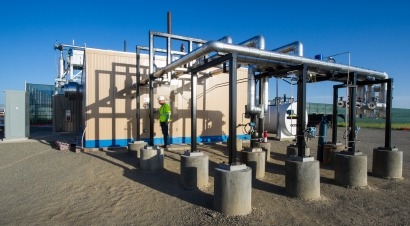 The consortium for the collaborative MiCROSOL project has inaugurated the demonstrator of its energy-access solution to support the development of bottom-of-the-pyramid (BOP) micro-industries at the Alternative Energies and Atomic Energy Commission’s (CEA) Cadarache Centre in France.

The MiCROSOL project aims to develop a single, modular standard technology for producing electricity, drinking water and heat simultaneously. It will primarily benefit micro-industries located in rural areas of countries having a high solar irradiance, particularly in Africa. The project is based on the principle of cogeneration of electricity and heat using solar thermodynamics and focusing on thermal storage technology using environmentally-friendly products.

The project was officially launched in November 2011 over a three year period with a budge to €10.9 million. It is being led by Schneider Electric, which is coordinating the expertise of eight other industrial partners and research organisations: the CEA (Alternative Energies and Atomic Energy Commission); Exoès; Exosun; the Energy, Mechanics and Electromagnetism Laboratory at the University of Paris Ouest; the Energy and Theoretical and Applied  Mechanics Laboratory at the University of Lorraine; Sophia-Antipolis Energy Development; Stiral; and TMW.

Financial support is being provided by the French environment and energy management agency (ADEME) Future Investment scheme in the form of a grant and a reimbursable advance for €5.1 million. The project and its demonstrator will be required to deliver a concrete solution for ADEME’s 2050 vision in its Solar Thermodynamics roadmap for French industrial companies. The consortium is planning to establish the project’s first pilot site on the African continent in 2014 with a view to starting commercialisation in 2015.

“MiCROSOL is a key project in Schneider Electric’s strategy to develop a comprehensive and integrated energy-access offer for bottom-of-the-pyramid populations” said Gilles Vermot Desroches, Senior Vice-President, Sustainability, Schneider Electric. “Through active collaboration with innovative young French companies, we have been able to develop a technology that meets the needs of BOP micro-industries, while also creating the conditions for a French entity to export excellence.”

The consortium plans to establish the first pilot site on the African continent in 2014 and to start the commercialisation phase in 2015.