120% rise in wind energy output in Central America during 2009

Wednesday, 02 February 2011
0
Toby Price
The latest report of the United Nation’s Economic Commission for Latin America and the Caribbean (ECLAC) in relation to the electricity subsector shows that the energy generated by wind power grew by 237.8 GWh over the period, which represents a 119.98% increase from 2008. The bulk of this growth has been attributed to the commissioning of major wind farms in Nicaragua and Costa Rica. 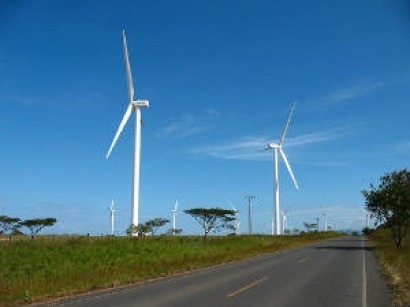 The increase in renewable energies in the Wholesale Electricity Markets of El Salvador, Guatemala, Nicaragua and Panama is also the result of the entry of new private investors.

In the case of Costa Rica, in September 2009 wind farms were developed in the province of Guanacaste, where 27 megawatts (MW) were installed. Later in the year in December, the same region of Costa Rica saw 55 900-kW wind turbines coming on stream, with a combined installed capacity of 49.5MW.

Meanwhile, in March 2009 Nicaragua was the scene for the region’s second foray into wind energy, when the 40-MW Amayo wind farm was commissioned. This facility is located in the department of Rivas and boasts 19 wind turbines.