Intelligent Rotor Blades to be Tested in US

Monday, 05 March 2018
0
Dan McCue
The Fraunhofer Institute for Wind Energy Systems IWES and its partners have developed a rotor blade with bend-twist coupling able to make more efficient use of large fluctuations in wind strength. More tests will be made after which three identical models will be constructed by the German Aerospace Center and shipped to the US. The blades will then be installed on a research turbine at the foot of the Rocky Mountains for a measurement campaign lasting several months. These activities will all take place within the scope of the “SmartBlades2” research project. 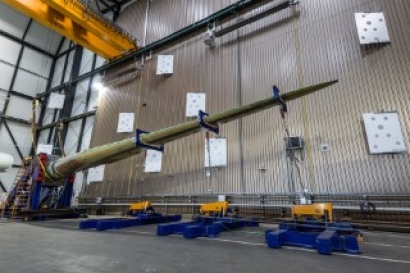 The aim of the measuring campaign is to determine whether the load reduction thanks to BTC seen in the simulation can be recreated under real-life conditions and whether its effect is as pronounced as expected. Under the supervision of the IWES Group for accredited and certified field measurements, a test campaign will be performed, in part using the newly developed “Aeroprobe system”, on the test turbine from the US project partner National Renewable Energy Laboratory. Two pressure sensors on the surface of the blade will measure the flow dynamics around the rotor blades. Moreover, the acceleration on the blade tip and deformation in the blade during operation will be detected.

In addition to testing of the two flap- and edgewise directions, testing of a rotor blade with bend-twist coupling also comprises a torsion test. During the subsequent dynamic tests, the stresses incurred over the entire service life of the rotor blade spanning 20 years are simulated in a drastically reduced time frame.

The concept of bend-twist coupling has been around for a while. The coupling of the thrust load with the torsion of the rotor blade structure offers the advantage of being able to react immediately to gusts and thus reduce the pressure on the turbine structure without the need for additional control actuators.

The challenge with BTC lies in accurately predicting the dynamic behavior of the rotor blade and its structural implementation. Considering very large blades in particular, the possibilities offered by classic blade control systems are limited as they are too slow and cannot react to local gusts.

As part of the “SmartBlades2” project, the members of the Wind Energy Research Alliance: DLR, ForWind, and Fraunhofer IWES together with six industrial partners – GE Global Research, Henkel, Nordex, Senvion, SSB Wind Systems, Suzlon Energy, and WRD Wobben Research and Development – are examining how BTC can be used reliably and effectively on very large blades. The aim of the project is to boost the economic efficiency of wind energy even further.

The German Federal Ministry for Economics Affairs and Energy (BMWi) has provided funding for the project in the amount of €15.4 million ($19 million).

The SmartBlades DemoBlade in the extreme load test: The loads are applied via three hydraulic cylinders. © Photo Pascal Hancz