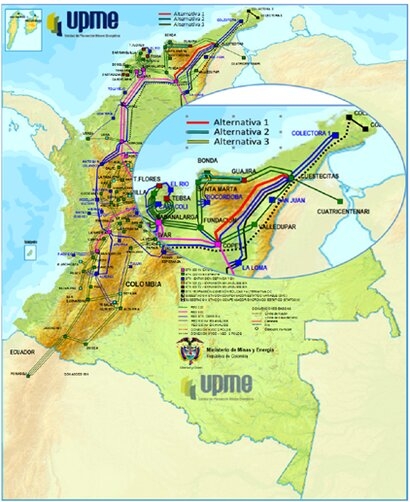 The application will evaluate the coincidence of power availability for wind power generation between various locations in the Northern area of Columbia (La Guajira) as well identifying the possibility of connecting additional generation capacity to an electricity transmission infrastructure.

Barlovento was the successful bidder of the selection process #CO-T1501-P002 published by UPME and financed through the IDB (Inter-American Development Bank) for the development of an application to evaluate the capacity of simultaneous wind power generation in the North of Colombia.

The tool has been developed within the framework of UPME's programme for the development of the Generation and Transmission Expansion Plan and the study on the viability of the connection to the National Interconnected System - SIN of generation plants of more than 5 MW.

It performs a statistical analysis of situations close to the capacity limit at each defined evacuation level, which will help to define future scenarios with over-installation of power. The analysis incorporates different frequencies of situations, seasonal and hourly patterns, persistence of high-power situations, complementarity with demand and complementarity with potential solar generation and national hydroelectric generation.

The application will allow UPME to evaluate situations of possible coincidence of generation dispatches from wind power plants, as well as to assess whether it is possible to incorporate additional generation capacity, specifying what additional capacity is plausible. The tool has been successfully implemented and the project is currently in the process of technical closure.

Barlovento has been working in Colombia for more than ten years on wind and solar projects: basic projects, resource and feasibility studies, installation of meteorological stations, grid studies. Barlovento is represented in Colombia, in the city of Medellin.

The National Operation Council (CNO) of Colombia approved the inclusion of Barlovento Recursos Naturales S.L. and Barlovento Latinoamérica SAC in the list of companies authorised to issue the technical opinion for the estimation of the historical series of wind speeds, the net effective capacity, the conversion factor of wind plants and the operating range of the power curve - wind speed of a wind plant (Agreement 789 of 2015).