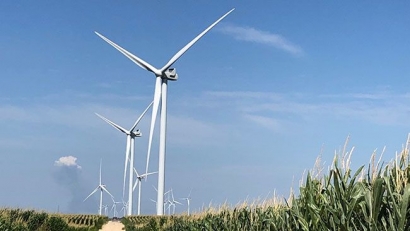 The project is an expansion of Frontier Windpower, which has been operational since 2016. Once complete, Frontier I and II will generate a total of 550 MW of wind energy.

“We’re pleased to be working with the Ball Corporation on the Frontier II project, which will be located in an area that has some of the best wind resources in the country,” said Rob Caldwell, president of Duke Energy Renewables.

Ball was advised on the Frontier II VPPA by Schneider Electric Energy and Sustainability Services, which assisted the company in its project selection and negotiations.

Full mobilization for construction for Frontier II will occur later this summer, and the wind project will be fully operational by December 2020.

During peak construction, the wind project is expected to create approximately 250 jobs.

Nordex Group will supply 74 4.8-MW wind turbines for the site.

“This project will utilize one of the most modern turbines in the country. The turbine technology will maximize the wind resource in Oklahoma to benefit customers,” says Patxi Landa, CSO of the Nordex Group.

Amshore US Wind provided development support for the project, and Wanzek Construction is the contractor.