Friday, 28 May 2021
0
Robin Whitlock
Low carbon energy developer Enterprize Energy has announced it has commissioned Geo-data specialist Fugro and its Vietnamese partner PTSC to install floating LiDAR survey technology at the site of the 3.4 GW Thang Long offshore wind farm – the first time such technology has been used in Vietnam. 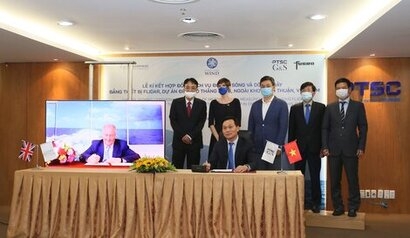 Offshore wind in Vietnam is increasingly recognised as the primary route to decarbonising the country’s energy supply, with its southern waters ranked in the top 10 per cent of global wind locations. However, there are few offshore wind developers currently positioned to capture this abundant resource and secure economic benefits for the country as it works towards a target of 42 percent wind power by 2045. In 2018, Enterprize Energy brought the potential of offshore wind energy off the coast of the Binh Thuan Province to the attention of the Vietnamese government, with a focus on accessing the best resource and identifying opportunities for grid stability solutions such as hydrogen storage.

The announcement for the installation of floating LiDAR marks the next step in the surveying process for Thang Long, the only large-scale offshore wind farm to be granted a survey licence by the Vietnamese government. To date, a full year of wind data measurements have been collected via fixed LiDAR to assess resource over the allocated area, with reconnaissance surveys to support the project team’s understanding of geological and seabed features occurring earlier this year. Based on initial results, Enterprize Energy has confirmed there will be no reduction in prospective area due to unsuitable seabed features such as basalt intrusions.

Fugro and PTSE will deploy Fugro’s ‘SEAWATCH Wind LiDAR Buoy’ to collect detailed wind resource, meteorological, and oceanographic data across the 2000 square kilometre project site over the next 12 months. The technology - comprising the SEAWATCH Wavescan Buoy as a platform into which the ZX 300M LiDAR is integrated - will track air pressure, humidity, air and water temperature, wave height and current, with support from a guard vessel which will also track fishery activity and supplementary ocean data from its own onboard sensors.

“Contracting Fugro and their local partner PTSE to install the first floating LiDAR technology in Vietnam at the Thang Long project site was a natural decision for us” said Ian Hatton, Chairman, Enterprize Energy. “The data the team will collect is central to informing the next stages in Thang Long’s development process, including long-term financial modelling and power purchase agreements. The results from our initial marine survey demonstrate that, as we had predicted during our proposal for a survey license, a majority of the seabed throughout the Thang Long Zone is suitable for placing turbines. Now, we can quantify how much energy can be generated throughout the project based on using all of the seabed we initially planned to build on. We are delighted to have taken another step towards harnessing the incredible wind resource off the coast of Binh Thuan, bringing a further 3.4 GW of renewables into Vietnam’s energy mix and opening up the opportunity for even more green energy capacity as we explore the potential for energy storage. We have lain the foundation upon which the full potential of the Thang Long zone can be released for the benefit of the Vietnamese people, in line with national planning and policies.”

The first 600 MW phase of the 3.4GW Thang Long offshore wind farm is due to come online by the end of 2025, with further phases developed on a rolling basis.