Tuesday, 25 September 2018
0
Robin Whitlock
EWT, a supplier of wind turbines for localised wind energy generation, has announced, at WindEnergy Hamburg, the successful installation of the first wind turbine on a German poultry farm, near Schöppingen. 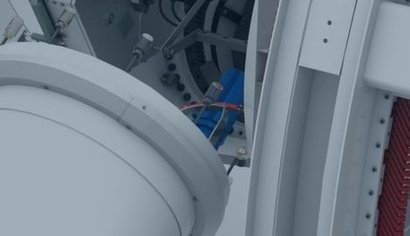 The DW61-750kW turbine was installed at Pohlkemper GbR Hähnchenmast in the first week of September, only two months after the signing of the contract. The farm has a high electricity consumption due to cooling and heating and the electricity generated by the turbine will mainly be used for farm operations. The surplus electricity will be fed back into the grid. In this way, the poultry farm will be able to avoid the high electricity tariffs applied to commercial and industrial end-users. Furthermore, self-consumption will reduce the load on the electricity grid while minimising losses from transport of electricity.

“Because of my high electricity consumption, I was looking for alternatives to reduce my energy costs” said Herr Pohlkemper, the owner of the poultry farm. “EWT came into the picture because of their 750kW rated, DiBT certified machine. A wind turbine rated at 750kW doesn’t have to tender for the EEG, effectively resulting in a higher export tariff. Bringing in the technology, but also the flexibility and critical output levels needed for this project convinced me to go ahead.”

In Germany, the installation of wind turbines is limited to areas specifically designated as wind energy sites. Small to medium businesses that can prove they will consume more than 51 percent of the annually generated energy onsite are excluded from this regulation and can install turbines outside these priority areas. The surplus electricity they feed back into the grid enables them to receive a Feed-in-Tariff.

Global demand for turbines in self-consumption projects is expected to grow strongly as end-user electricity prices go up due to cost increases driven by the electrification of the economy. Furthermore, wind turbines are the perfect solution for commercial and industrial users who want to offset a large part of their electricity consumption by generating their own electricity with minimal use of land.

Bas Hoogeveen, Sales Manager at EWT added that this first project in Germany showcases there is a need to offset high electricity prices and proves that the self-consumption model works. Germany represents a mature wind energy market and is leading the renewable sector.

Image: A close-up of a DW61 wind turbine (Photo courtesy of EWT)