Wednesday, 06 October 2021
0
Robin Whitlock
GE Renewable Energy has announced that its Haliade-X prototype in Rotterdam has started operating at 14 MW, enabling the company to become the first industry player to operate a turbine at this power output. 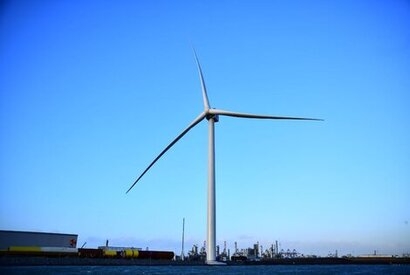 The Haliade-X 14 MW is an uprated version of the Haliade-X 13 MW, which received its type certification in January 2021. The GE Renewable Energy team has now officially started certification measurements on the Haliade-X 14 MW. One turbine can generate up to 74 GWh of gross annual energy production, saving up to 52,000 metric tons of C02, which is the equivalent of the emissions generated by 11,000 vehicles in one year.

“We’re pleased to announce that the Haliade-X prototype is the first turbine in the industry to successfully run at 14 MW” said Vincent Schellings, Chief Technology Officer, GE Renewable Energy Offshore Wind. “When we first commissioned our Haliade-X prototype in November 2019 at 12 MW, we made a big leap forward in the industry. Over the past two years we have learned a lot about operating and optimising the performance of our Haliade-X platform, enabling us to uprate the Haliade-X platform to 14 MW.”

The ability to produce more power from a single turbine means fewer turbines need to be installed at each wind farm. In addition to less capital expenditure, this also simplifies operations and maintenance, improving the affordability and accessibility of renewable energy for customers and consumers around the world.