Wednesday, 02 March 2011
0
Toby Price
For the first time in 20 years, growth of the global wind power market has stumbled by 5.8% to 35.7GW in 2010 (37.9GW in 2009), says EurObserv’ER in its latest Wind Barometer released this month. While Asian market growth has crept up steadily and now has a grip on more than half the global market, the North American market has taken a knock and the European market has slowed down. 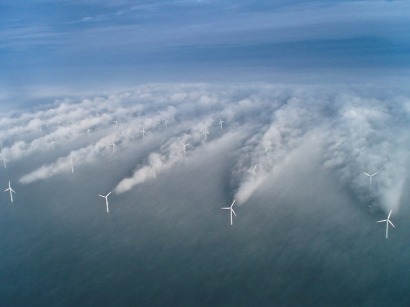 EurObserv’ER’s latest data shows new wind turbine installations across the world in 2010 will fall short of the 200 GW landmark figure, as first estimates quantify the market at 35.7 GW, bringing global capacity to 194.5 GW, up 22.4% on the 2009 installation level.

The Asian market is casting an increasingly long shadow over the world’s other regional markets. In 2010, it was responsible for over half the newly installed capacity in the world (53.3%), ahead of Europe, which still accounts for more than a quarter of the global market (27.4%), and North America (16.3%) which almost went into freefall due, the American Wind Energy Association blames, to the absence of any long-term federal policy and the prevailing tight economic conditions that limited funding abilities over the twelve-month period.

First estimates calculate the EU market at around 9.3 GW in 2010, as against 10 GW in 2009, which raises total installed wind power capacity in the EU excluding non-working installations to over 84.3 GW. The European market entered a new development phase as its focus turned increasingly to the offshore market in the countries of Northern Europe, and to new emerging markets in Eastern Europe. The mature markets will continue to wield influence but their growth will flatten out. Despite the sluggish performance of its long-established markets (Spain, Germany, France, Italy and the United Kingdom) whose operators are struggling to find the new sources of funding required for continual market growth, Europe will continue to have the highest total installed capacity for some time to come as it is home to 44.3% of the global wind turbine base ahead of Asia (30.1%) and North America (22.7%).

Asia in the limelight

EurObserv’ER estimates that European-scale investments should hold up (to the tune of €13 billion) thanks to offshore projects which are grasping an increasing market share, and for many years now, the European wind power industry has adjusted to the globalisation of the wind turbine market and European industrialists have been obliged to forestall the tremendous growth of the global and Asian market in particular by developing their business far away from their original market.

Most of the European and American majors, such as General Electric, Vestas, Siemens, Gamesa and Nordex, set up in China as soon as the Chinese market rolled out. Although these players dominated this market as little as only five years ago, they are now having to deal with the unstoppable rise of the Chinese wind power industry.

Wind power is also beginning to move in on developing countries, which demonstrates that the sector is becoming increasingly competitive. According to the Global Wind Energy Council, India installed 139 MW, Brazil 326 MW and Mexico 316 MW.

This mix of factors, EurObserv’ER concludes, “should lead to market concentration in fewer hands because the small players are bound to struggle to hold onto their market shares, especially as major manufacturers who have economies of scale on their side clinch projects for several hundreds of MW”.

The next EurObserv'ER Barometer focuses on photovoltaic and is expected in April 2011.