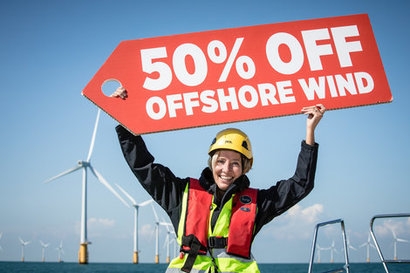 The figures, reported by environmental group Greenpeace, surpass expectations with offshore wind now being the lowest cost option for large-scale, low-carbon power. The UK’s offshore wind sector has been transformed over the last decade thanks to Government support, huge strides in home-grown innovation and increased in both turbine efficiency and blade size. This has in turn placed the UK in the top position globally for installed capacity.

Wind turbines have more than doubled their power capacity since 2007. The current generation of 8MW turbines have 260 foot blades, spanning an area the size of the London Eye. These blades generate enough energy to power a home for 24 hours with a single rotation. By the mid-2020s turbine capacities are set to double again, reaching 15 MW. These advances in turbine technology are a big part of what has driven recent reductions in costs per megawatt hour.

Offshore wind farms can now be built in just two or three years, minimising the risk of cost overruns and ensuring that technological advances are adopted quickly. The sector is already delivering thousands of jobs in regions of the UK with some of the highest unemployment figures. UK offshore wind is also attracting billions in foreign investment, and securing hundreds of international contracts for British companies. Future growth potential is enormous as the global market is set to boom over the next decade.

At this record low price, offshore wind power is a great deal for UK energy given that the UK needs a growing supply of affordable and secure energy.

“This is a breakthrough moment for offshore wind in the UK and a massive step forward for the industry” said Matthew Wright, Managing Director for DONG Energy UK. “Not only will Hornsea Project Two provide low cost, clean energy to the UK, it will also deliver high quality jobs and another huge boost to the UK supply chain. Successive governments deserve great credit for providing the certainty for continued investment in offshore wind, enabling it to become the thriving renewable industry it is today. Costs are falling rapidly, long-term and highly-skilled jobs are being created across the North of England and the UK supply chain is going from strength to strength. We’re now really seeing the benefits of this commitment to offshore wind and there is still so much more to come. Indeed, it has the potential to play a key part in the realisation of the UK’s industrial strategy.”

Jonathan Cole, Managing Director for Offshore Wind at ScottishPower Renewables, added that the ongoing reductions show that offshore wind is in pole position to be the foremost low carbon power source, with the UK as the global market leader. A strong offshore wind sector powers the UK economy with reliable and affordable clean power. It is creating highly-skilled jobs in industrial and coastal communities that will really benefit from such significant investments.

The figures were also welcomed by other companies such as SSE and Vattenfall.

“This record breaking price drop from offshore wind marks a huge moment for the UK energy sector” said Hannah Martin, Head of Energy at Greenpeace UK. “The price of offshore wind power is 50 percent cheaper than just two years ago, this means we are witnessing a revolution in UK energy. Offshore wind already powers 4 million homes in the UK, and will power more than 8 million by 2020. It has also created jobs, regional development and export opportunities. And official polls show that 80% of people are in favour of offshore wind. The government needs to seize the opportunities of this great deal, which they themselves have helped to create.”

According to Catapult, £27.5 billion will be invested in UK offshore wind projects by 2021. Much of the job creation in the offshore wind industry has been focused on key regions where regeneration is a Government priority, such as the North East. An example is the £310 million Siemens turbine blade factory in Hull which has created 1,000 new full-time jobs. Currently, there are approximately 10,000 full-time equivalent (FTE) jobs in the sector and by 2032 the total amount of direct employment in the sector is estimated to be in the region of 21,000 FTE jobs.