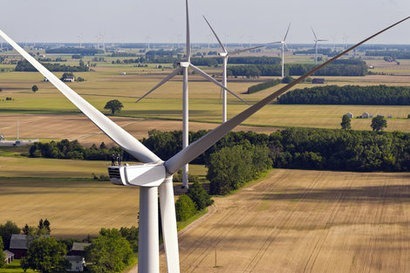 Nordex will be installing the turbines on a turnkey basis. The two companies will continue their partnership on a long-term basis, following the completion of the Pampa wind farm, under a premium service contract with a minimum duration of ten years. Nordex will commence work on the access routes, foundations and cabling for the wind farm in the first half of 2015. It is expected to go online towards the middle of 2016 and will provide around 180,000 households with local clean electricity.

“Nordex is very pleased to have been selected as supplier for UTE again” said Lars Bondo Krogsgaard, a member of Nordex’ Management Board. “UTE is changing Uruguay’s energy landscape at an impressive pace, and we are proud to be allowed to be part of the realization of UTE’s vision.”

Services and components for the wind farm will be sourced from a number of local companies during the construction as well as the maintenance phase. The Pampa project is located in the largest and thinly populated Department of Tacuarembo in the heart of Uruguay. The area benefits from mean wind speeds of 7.9 metres per second. The project is being financed by KfW IPEX-Bank and Bayerische Landesbank.

To date, Nordex has installed a total of 49 turbines in Uruguay with a combined capacity of almost 120 MW. A further 50 MW will be installed alongside the Pampa project.