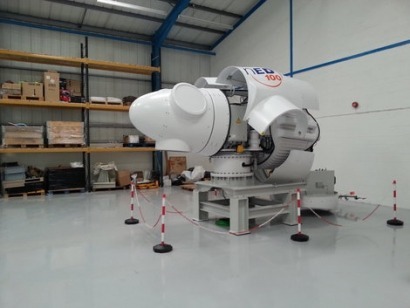 Norvento’s portfolio of approved sites and new installations for the company’s 100kW nED100 turbine is growing and so the firm has decided to expand its operations in the UK. The expansion is intended to demonstrate the company’s long-term commitment to bring new innovation to the UK wind sector which is worth over £100 million to the country’s rural economy.

The company’s enlarged workforce has also contributed to local employment opportunities in renewable energy. Three new appointments have been made across Norvento’s London and Bristol premises, including a new Regional Sales Manager to cover the North counties and Scotland, an Installation and Operations Manager and an Office Manager and Accounting supervisor.

The recently opened 4000 square metre Bristol site will serve as the main warehouse and distribution hub for the UK market, becoming strategically important as the company’s project pipeline in Wales and the West Country expands.

“The Avonmouth area is becoming something of a renewable energy hub, with a number of wind turbine developments recently commissioned that build on the existing ones and some firms in the sector basing their operations in and around the city” said Ivo Arnús, Director of Business Development, Norvento. “Logistically it’s extremely well connected with both London and the North, and in close proximity to Wales, which is becoming a key target market for us. Norvento is a highly research-orientated firm, and both our recruitment policy and choice of location for our UK operations have been influenced by this. Bristol’s strong universities were certainly a draw for us.”

The nED100 turbine was designed with the UK distributed wind market in mind. It incorporates some of the technological innovations of utility-scale turbines such as direct drive, a permanent magnet generator, integrated, fully-electrical pitch control and variable speed controls to help regulate output. It also has a thorough remote monitoring and control system which is aimed at bringing great reliability to the farm-scale and small-scale industrial markets.

The turbine also has a grid-friendly design and unique low-noise mode which will help to address grid constraints and planning obstacles which currently threaten to undermine the ambitions of would-be independent power producers across the UK. These features will help to minimise the impact of the turbine on local transmission infrastructure and communities.

“A history of inefficiency and a reliance on outdated technology in the UK medium wind sector has not allowed farmers and local communities to maximise their income and returns on investment” Mr Arnús added. “With nED100, Norvento is seeking not only to address these challenges but also to raise the standard. The technological innovation of the turbine is supported by unmatched warranties, such as power curve, noise and eventual availability guarantees. Norvento also offers innovative financing packages that make the purchase of new units easier and more profitable.”

Norvento’s growing UK project pipeline currently consists of over 5MW at various stages of development with a further 4MW in screening. The company also has an expanding international footprint and in 2012 generated a total output of 366,711MWh building on a 30-year reputation for design, construction, operation and engineering excellence. It has a well-established research and development programme and in 2008 the company began a five year development programme with the ambition to manufacture and build an entirely new product line for the distributed wind market.