Friday, 20 May 2022
0
The latest issue of the Wind Vision Report estimates that wind energy will supply 20% of the country’s electricity in 2030, and 35% in 2050. Increasingly larger wind farms pose a challenge due to the land area required. Penn State Berks recently received funding for a proposal titled “Evaluation of Clustering Effect in Harmony Turbine's Vertical Axis Wind Turbine Farms” to study this alternative method. The grant is for $69,833, and it will be matched in its entirety by Penn State. 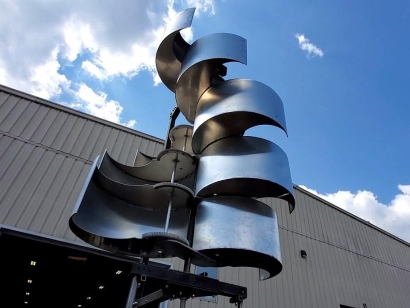 One major goal of this research is to increase wind-farm power density. The large majority of existing farms use horizontal-axis wind turbines. Due to their axis of rotation, vertical axis wind turbine wakes and the flow are distinctly different from their horizontal-axis counterparts. Recent studies have suggested the possibility of a significant increase in power densities for wind farms when vertical axis wind turbines are used with a closer spacing to better exploit the flow patterns created by upstream turbines.

On April 8, Pennsylvania Gov. Tom Wolf announced a $2.3 million investment in 36 student research projects that will help advance innovation in several sectors of manufacturing. The 36 projects are part of the Manufacturing PA Initiative’s fellowship program. The program embeds the commonwealth’s best and brightest graduate and undergraduate students with local manufacturers. Once paired, the students embark on research projects to develop new technologies and advance innovation statewide.

The Corporate Engagement Center and the Pennsylvania Technical Assistance Program (PennTAP), within the Office of the Senior Vice President for Research at Penn State, worked to promote the program and match manufacturing partners with faculty and students across the University. PennTAP adviser Rich Joyce facilitated the connection between Azar Eslam Panah, associate professor of mechanical engineering at Penn State Berks, and Harmony Turbines, developer of leading-edge residential and small-scale wind turbine systems. Eslam Panah will serve as the principal investigator on the grant.

“We hypothesize that Harmony Turbines have a positive influence on each other when packed in well-designed clusters and they increase the power generation of a single turbine. Furthermore, the cluster designs allow for closer turbine spacing, resulting in a greater number of turbines for a given land area compared to conventional configurations. Therefore, both the turbine and wind-farm efficiencies can be improved, leading to a significant increase in the density of power production per unit land area.

“Another important outcome of this project is to increase the innovation and educational capabilities at Penn State Berks on real-world manufacturing solutions in Pennsylvania. This will open the door for other companies to start collaborations with academia and use their resources for a better future. It also provides a unique opportunity for undergraduate students to get inspired by the graduate-level research between campuses and practice transition to industrial workforce by working with engineers at Harmony Turbines.”

Harmony Turbines Inc. was formed in August 2020. The company is based in Lebanon, Pennsylvania.

The project will fund two Penn State Berks students to conduct the experiments in the college’s Fluid Discovery Lab, a state-of-the-art engineering laboratory and the only open access water channel dedicated to the study of fluid dynamics in the Penn State system.

The study also will fund a graduate student from the University Park campus to perform data analysis. The test rig will be designed and fabricated by a group of four Penn State Berks electro-mechanical engineering technology students through their 2022 capstone project in collaboration with engineers at Harmony Turbines.