Friday, 21 December 2012
0
REM
Siemens Energy has installed the prototype of a new 4 MW wind turbine in Østerild, Denmark. The new wind turbine type is a designated SWT-4.0 and is based on the firm's proven technology of the SWT-3.6. 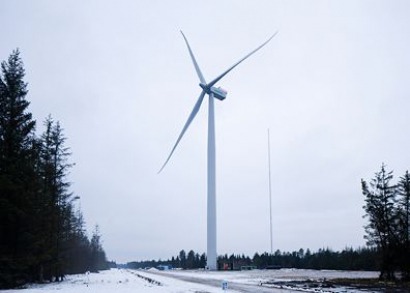 The prototype 4.0 MW turbine is initially equipped with the standard 120 meter rotor of the 3.6 MW turbine but will shortly be upgraded with a 130 meter rotor using 63 meter long rotor blades. Following extensive testing the SWT-4.0-130 will be launched for sale with the 130 meter rotor diameter in spring 2013.

“Thanks to a generator and rotor upgrade, the new 4MW allows our customers a faster return on investment than our proven 3.6 MW wind turbine”, said Henrik Stiesdal, Chief Technology Officer of the Wind Power Division.

"The SWT-4.0-130 extends the performance of the proven Siemens SWT-3.6 wind turbine, which is already established as the preferred offshore turbine type in the multi-megawatt class. So far, Siemens has installed almost 500 of its 3.6 MW wind turbines and has another 1,200 turbines in its order backlog," Stiesdal added.

The new Siemens SWT-4.0-130 makes use of several key technologies that are already widely used in offshore applications of the market-leading Siemens 3.6 MW turbine.

The nacelle and tower structures are essentially upgraded 3.6 MW variants, and the blades are manufactured using the proven Siemens IntegralBlade technology without glue joints.