Monday, 14 July 2014
0
Robin Whitlock
Siemens has completed installation of the offshore platform for the direct-current connection HelWin2 in a contract for the German-Dutch grip operator TenneT. 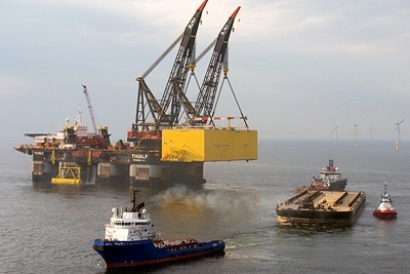 The platform is one of five HVDC offshore grid connections in the German North Sea ordered by TenneT and the completion of the third of these is a significant milestone for the overall project. The HelWin2 platform is located 35 kilometres north of the island of Heligoland, after which it was named. The platform is directly adjacent to the HelWin1 platform erected by Siemens in August 2013. The company also erected the BorWin2 platform off the coast of Borkum in April this year.

“We have now installed three high-tech platforms for TenneT in the North Sea” said Jan Mrosik, CEO of the Power Transmission and Smart Grid Divisions of Siemens AG. “The HelWin2 project is now in the homestretch to begin operation in the coming year.”

The first four of the five North Sea grid connections will begin commercial operation successively over the second half of 2014 and the first half of 2015. In total they will provide transmission capacity of over 2.9GW. The fifth connection, BorWin3 will be ready for operation in 2019.

The platforms transform the alternating current power generated by the wind turbines into direct current for efficient transmission to the mainland, using the Siemens technology installed on them. At the land-based stations, the electricity generated by the connected wind farms is converted back into the alternating current power required for feeding into the transmission grid. Siemens low-loss high-voltage direct current (HVDC) technology will ensure losses are less than four percent. The platforms themselves are designed to operate for decades in the North Sea and are fully automated.