Tuesday, 23 October 2018
0
Dan McCue
Massachusetts officials have signed a lease agreement with Vineyard Wind to utilize the New Bedford Marine Commerce Terminal as the primary staging and deployment location for its offshore wind project to be located 14 miles south of Martha's Vineyard. Vineyard Wind, a partnership between Avangrid Renewables and Copenhagen Infrastructure Partners, was selected in May of 2018 to provide 800 MW of offshore wind power to Massachusetts and represents 5.5-6 percent of the state's electric load. 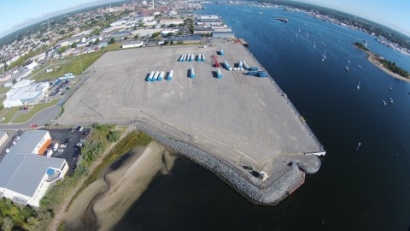 "The historic and bipartisan energy legislation we passed in 2016 created a competitive procurement process that put Massachusetts in position to host the first large-scale offshore wind project in the United States and be a national leader for this emerging industry," said Massachusetts Governor Charlie Baker.

Constructed and operated by the Massachusetts Clean Energy Center (MassCEC), the New Bedford Marine Commerce Terminal is a 29-acre heavy-lift facility designed to support the construction, assembly, and deployment of offshore wind projects, as well as handle bulk, break-bulk, container, and large specialty marine cargo.  The first port in North America specifically built to support the staging and deployment of offshore wind components, the terminal has been engineered to sustain mobile crane and storage loads that rival the highest capacity ports in the world.

The lease agreement between MassCEC and Vineyard Wind represents a commitment to an 18-month lease at $6 million annually to use the terminal as the primary staging and deployment location for its offshore wind project.

In April, MassCEC released a report on the workforce needs and economic impact of the emerging offshore wind industry, finding that the deployment of 1,600 MW of offshore wind is estimated to support between 6,870 and 9,850 job years over the next ten years and generate a total economic impact in Massachusetts of between $1.4 billion to $2.1 billion.

"The New Bedford Marine Commerce Terminal provides Massachusetts with an important piece of infrastructure that will be critical in helping the offshore wind industry to establish operations in this new American marketplace," said MassCEC CEO Stephen Pike.

The final acceptance of the Vineyard Wind contract is conditional upon the regulatory approval at the Massachusetts Department of Public Utilities (DPU), which is anticipated to be completed in early 2019.  The project also requires permitting approval from state and federal agencies, including the Bureau of Ocean Energy Management.