Wednesday, 22 April 2015
10
Robin Whitlock
Vortex Bladeless, the Spanish startup aiming to commercialise a new type of ‘bladeless’ wind turbine, has now formed an advisory board and relocated to Boston, USA. 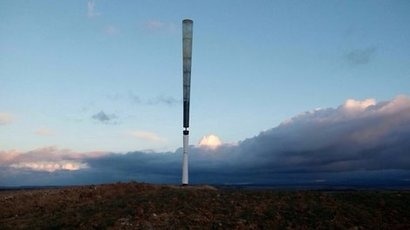 The company has officially confirmed its relocation to Boston and the formation of its Advisory Board, which includes members from Harvard University, IDEO, TerraForm Power (SunEdison group) and Dat Venture. The Advisory Board will support Vortex Bladeless during its rapid growth in the US.

Vortex Bladeless will be launching its first product at the end of this year, with Massachusetts-based production facilities opening in 2016. The company has also formed a partnership with SEO Bird Life, an organisation with 13.5 million members. It is also currently raising $2.5 million from Spanish and International investors to fund it next, Series A, financial round and has received a grant from Repsol. The company will also be launching a crowdfunding campaign in June.

The multi-patented wind turbines are bladeless and therefore completely free of noise with no risk to birds. The technology also reduces reduce manufacturing and maintenance costs from conventional multi-blade wind power generators by 50 percent. Plans are being developed for a pilot in Asia although no further details about this are available at present.

For further information please REM’s interview with David Suriol earlier this month and an explanatory video in our new tvER section.

Tags: Wind , Wind turbine
Add a comment
Hubert
I lost my canine this year. It was unmistakably more horrendous than some purchaser custom essay online on the web. In any case, as much as it torments me to state, I wouldn\'t take it back. His demolition trained me to stop and take in the splendid environment, and stop and smell my own poo. It was a low and high motivation driving 2016.
Patric
Hello! Hope you are doing well. I am so glad to be here. I d your site. I found here so many useful tips and ideas. Please keep it good posting. Besides, I want to give a valuable advice for you and all your visitors - www.custom-paper-writing.org - the best online writing service. Use their particular paper help and be sure in brilliant quality all of your new writings without any troubles.
Coursework Writing
This was really nice and excellent post i really love to see this kind of post you are so good and outstanding with your work thank you for sharing.
jannete
Frankly speaking I know nothing about turbines etc. All my excellent essays on technologies are ordered at http://best-custom-essays.com.
DenisClear
Buy essays at the http://www.perfectessaysonline.com! It will really save your time and effort! You will go about your personal affairs and hobbies and enjoy your life! These services do not requires expensive costs!
tiffany
This type of energy is very efficient nowadays. By the way, here are greatr essays on this topic at http://custom-essays-online.com
Mary
Get professional essay writing assistance at http://buy-custom-essays.net
Mary
Hi. Nice post. Thanks for sharing that. http://special-essays.com - professional essay writing services.
lilac
Wind turbines are as useful as solar batteries. They environment friendly and give people the required resources.P.S. get an original essay on this topic from Http://essaywritingstore.com.
Christiana Antiga
[url="http://www.irishessays.com/where-to-buy-essays-online "]buy essays online[/url]
wind