Wednesday, 07 June 2017
1
Al Maiorino
The new offshore wind turbines at the Burbo Bank Extension Wind Farm in Liverpool Bay can power a single home for 29 hours with just one rotation. Dubbed the “world’s biggest wind turbines,” the new MHI Vestas turbines are 8 MW each, which is more than double the capacity of the 3.6 MW turbines installed at Burbo Bank less than a decade ago. 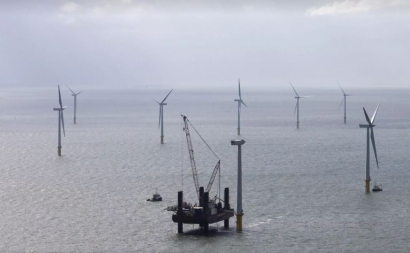 Burbo Bank Extension Wind Farm is the first time the MHI Vestas have ever been commercially deployed, and now these 32 turbines will power 230,000 homes in the UK.

The UK has certainly established itself as a global leader in offshore wind technology and is starting to reap some of the benefits that come with that accomplishment. According to an article published last month in Recharge News, titled “Innovation is Key to the UK’s Offshore Wind Success,” the supply chain for UK offshore wind projects in 2016 was worth approximately €3.1 billion. That number is poised to increase as installed capacity increases. The new turbines at Burbo Bank Extension contribute to this supply chain value because they were designed, developed and assembled in the UK.

The cost of offshore wind development has dropped by a third since 2012, which is faster than experts predicted according to the April 2017 article “UK’s Bet on Offshore Wind Pays Off as Costs Plunge” published in The Telegraph. The UK struck gold at the right time with its offshore wind investment, and now the government does not plan to funnel any excess funds into onshore wind or solar in any of the three energy subsidy auctions for emerging renewable technologies that will take place for the first time in two years. The total budget for these auctions expected to take place by 2019 rings in at €730 million.

As incentives shift from one prioritized renewable industry to another, UK renewable companies in any industry can benefit from making strategic outreach to help ensure new projects are approved. If less excess funding will be allocated for on-shore wind and solar, it is even more important for onshore wind and solar companies to be smart about building public support for new projects in order to maintain a balance and see new installations through to fruition. Otherwise, as projects progress through the local entitlement process, any delays cause costs to rise quickly. Activating a sturdy base of public support can prevent these delays and keep costs down over the course of the approval process for new projects.

Millennials represent one target audience that makes sense for renewable companies to communicate with in the local communities in which they seek to build. According to a 2016 report from Accenture, 61 percent of millennials stated that they would sign up for a digital app that would allow them to track their energy usage and help reduce their carbon footprint. Additionally, twice as many Millennials compared to those over age 55 are likely to sign up for solar panels in the next 5 years. Millennials currently make up more than 25 percent of the population in the UK and are assuming leadership positions in public policy, environmental organizations and renewable companies, making them prime audiences for engagement.

With strategic and carefully tracked outreach, Millennials can become key advocates for new proposals in no time. Because Millennials are so well connected, resources such as Facebook and Twitter have become effective tools to build support for renewable projects. Companies should create both a website and social media accounts as digital resources designed to help raise awareness and provide varying levels of detail to the community about the proposal. Facebook and Twitter will drive impressions to the website through both paid and organic reach. Ads on these platforms are cost-effective ways to increase engagement and awareness, and ads can be targeted to social network users of a particular age, political leaning or proclivity towards environmental causes.  As the social media following grows, content gets shared and new viewers visit the project website to learn about the proposal in greater detail. Both tools are great resources to drive calls to action in the form of letters (or Tweets!) of support to public officials, hearing testimony, petition signatures in support, GOTV efforts and so on.

Any digital advocacy for a particular project should also coordinate with third-party stakeholder outreach. Presentations to the membership of local environmental group chapters, neighborhood associations and other taxpayer groups make for a great introduction to the project in-person. These efforts can then be followed up with coordinated social media efforts and e-newsletter blasts for various calls to action as needed. Through coordinated digital efforts, these groups can become valuable assets for reaching supportive audiences. Industry-specific groups can also provide well-informed hearing testimony in support of the project to sway the opinions of public officials.

Building grassroots support is key to continuing the momentum for renewables in the UK and across the globe. Millennials are inclined to appreciate the benefits of new renewable projects and are well equipped spread the word about project benefits. Digital tools have become an essential vehicle through which to reach the most interested parties and can lead to relationships with key advocates that will make a world of difference in the permitting process.

Tags: Wind ,Offshore ,Solar ,wind farm ,Wind turbine ,Renewable energy ,Carbón
Add a comment
C
Millennials is a vague word to describe a demographic group. It seems to have no accepted definition. Irrespective of this, they might be 25% of the UK population which leaves the other 75% who need persuading, or 26% for a majority. Or is this just a matter of who shouts loudest wins, i.e. the tyranny of the minorities?
¡Suscríbete!
pv