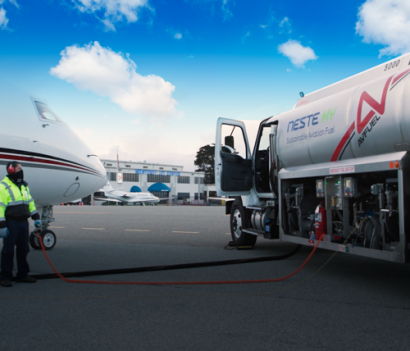 The FBO received its first load of the fuel on March 11, marking the beginning of a new era for the Avfuel Network in sustainability.

“Avfuel’s provided a number of demonstrative SAF loads over the years, but this is our first opportunity—through Neste MY SAF—to regularly provide the fuel for a customer,” said Keith Sawyer, Avfuel’s manager of alternative fuels. “We look forward to collaborating with Neste and Monterey Jet Center to ensure the logistics behind supplying Neste MY SAF are streamlined and efficient as we prepare to extend this offering to other customers.”

Each truckload of SAF that Avfuel delivers to Monterey Jet Center will provide a 22 metric ton reduction in carbon emissions over the lifecycle compared to petroleum-based jet fuel—the equivalent of making five passenger vehicles zero emissions for one year. SAF is the most effective way to reduce a flight’s carbon footprint; and, in the future, SAF could deliver up to 80% less greenhouse gas emissions versus traditional jet fuelif used in its neat form.

“We’re very pleased to be at the forefront of efforts to mitigate the environmental footprint of aviation operators around the globe,” said Matthew Wright, general manager of Monterey Jet Center. “Our collaboration with the Monterey Regional Airport, Neste and Avfuel has been long in development. To do our part in leading the way for the future of aviation fuel was important to us so that we could actually make a difference for future generations, and offer flight departments and operators a real pathway for decreasing their impact on the environment.”

This landmark fuel load comes just two months after Avfuel and Neste announced a strategic partnership to supply more SAF to the business aviation market. Through their agreement, Neste will provide Avfuel with sufficient SAF in volumes able to meet the growing demands of its customers, making Avfuel one of the first United States companies able to supply the fuel on a regular basis. Neste expects to have the capacity to produce some 1.5 million tons (515 million gallons) of SAF annually by 2023.

Neste MY SAF is made from sustainably sourced, renewable waste and residue materials—such as used cooking oil. It is a drop-in fuel that, once blended with petroleum jet fuel, meets ASTM D-1655 specification for jet fuel. This makes Neste MY SAF an optimum solution to directly reduce greenhouse gas emissions from aircraft, requiring no extra costs, modifications or changes to the aircraft or fuel distribution procedures.

“We are thankful to the Neste and Monterey Jet Center teams who have joined Avfuel in leading the charge in sustainability,” said Craig Sincock, Avfuel’s CEO and president. “Making sustainable aviation fuel regularly available to sustainably-minded operations is the best way to reduce carbon emissions at the source. Together, we’re not just facilitating the supply chain of a new product, we’re facilitating a cleaner, brighter future for aviation and our communities—and that’s something of which the Avfuel team couldn’t be more proud.”