Friday, 30 April 2021
0
REM
Neste and NuStar Energy L.P.  have announced  that supply trucks are now able to load Neste MY Sustainable Aviation Fuel™ at the NuStar-operated Selby Terminal near San Francisco, Calif. The first gallons have been safely picked up and delivered to the nearby Monterey Regional Airport. 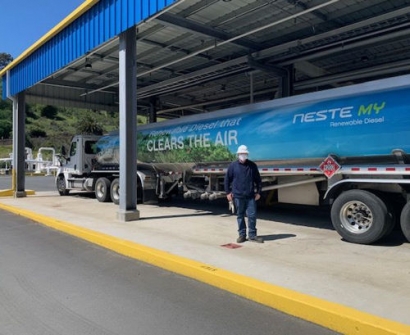 Due to the strategic location of the Selby Terminal, Neste and its partners Avfuel and Signature Flight Support are now able to supply sustainable aviation fuel to a growing number of airports across the western United States.

“We must act now to reduce emissions from air travel in order to preserve the many benefits flying brings to our lives and the economy,” says Chris Cooper, Vice President for Renewable Aviation for Neste in North America. “Sustainable aviation fuel is one of the easiest ways to do this, allowing aircraft and passengers to fly much more sustainably starting right now.”

While NuStar has handled conventional jet fuel at its Selby Terminal for decades, the companies  are now working together to establish the facility as a hub for low-emission renewable fuels and to make it easier for businesses and cities to access renewable diesel and sustainable aviation fuel.

“We are excited about this project as it fits into our strategy for growth by continuing to improve utilization of existing assets while executing NuStar’s renewable fuels strategy on the West Coast. And we are proud to partner with an industry leader like Neste,” said NuStar President and CEO Brad Barron.

“We are pleased to have established NuStar as an early mover and leader in the renewable  fuels space with a number of renewable fuels projects with other key customers throughout the region,” Barron added. “These projects coupled with our customers on the West Coast have allowed NuStar to capture market share and build important customer relationships with key global producers. And our facilities are positioned to further benefit as the renewable fuels market continues to grow and third parties announce new production and conversion supply  projects for renewable diesel, renewable jet, ethanol and other renewable fuels.”

NuStar handles and stores a significant proportion of the total low-carbon fuels volumes utilized in California, including nearly 27 percent of renewable diesel, 18 percent of ethanol, and six percent of biodiesel.

In fact, Neste has supplied approximately 220 million gallons of Neste MY Renewable Diesel™ into California through the NuStar Selby Terminal over the last decade. This is enough fuel to power nearly 12,000 Class 8 trucks, more commonly called big rigs, for one year, delivering the same climate benefits as building nearly 430 wind turbines or planting more than 2.4 million trees.

Where renewable diesel, specifically, is delivering the biggest impact is in big rigs, emergency and first response vehicles, tractors, construction equipment and other heavy-duty road vehicles. These are essential vehicles to California’s economy and Californian's quality of life, yet are hard to electrify. Filling up on renewable diesel can get millions of these existing diesel powered vehicles moving with a significant, immediate cut in GHG emissions. In fact, data from the California Air Resources Board shows that renewable diesel and biofuels have been the largest contributor to the success of the state's Low Carbon Fuel Standard – eliminating more than 18 million tons of CO2 emission since 2011.

“Renewable fuels must play a larger role starting right now to fight climate change,” says Jeremy Baines, President of Neste US. “There are millions of heavy, diesel powered road vehicles and jet-powered aircraft in service today, with more planned to come into service in the years ahead. These vehicles are not going away anytime soon. So, we must act now to get these vehicles running on smarter, cleaner renewable fuels.”

To make it even easier for fleet operators to fill up on renewable diesel, Neste is expanding its renewable diesel fueling network across the U.S. West Coast and has partnered with a number of local, trusted fuel distributors in California and Oregon. As more states, such as Washington, New Mexico, and New York, progress and adopt clean fuel standards, Neste will be ready to move quickly and supply renewable diesel and sustainable aviation fuel into these markets.