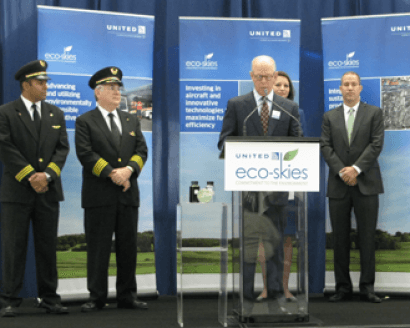 The plane was fuelled with 40 percent Solajet and 60 percent petroleum-derived jet fuel, and departed from Houston’s IAH airport at 10:30 in the morning and landed at Chicago’s ORD airport later that afternoon.

Solazyme, which is ramping up production capacity to produce 500,000 MT of renewable oil by 2015, also signed a Letter of Intent with United to supply up to 20 million gallons per year (approximately 70,000 MT) of renewable jet fuel starting in 2014.

“Today’s historic flight with United marked a significant milestone in the history of aviation, and demonstrated the commercial applicability of our drop-in fuel,” said Jonathan Wolfson, the company’s CEO. “The US Navy has demonstrated the effectiveness of our fuel in multiple vessels over the past year, and we are honoured to be working with industry pioneers such as United and Honeywell’s UOP to see this important next step in the commercialization of our renewable fuels.”

To date, Solazyme has produced and delivered the largest quantities of microbially-derived advanced biofuels in history. These deliveries include over 375,000 litres of in-specification marine diesel and jet fuel.

Headquartered in South San Francisco, Solazyme transforms a range of low-cost plant-based sugars into high-value oils such as the jet fuel used for this landmark flight.

In 2010, the company delivered over 80,000 litres of algal-derived marine diesel and jet fuel to the US Navy, constituting the world's largest delivery of 100% microbial-derived, non-ethanol biofuel. Subsequently, it was awarded another contract with the US Department of Defense for production of up to 550,000 additional liters of naval distillate (SoladieselHRF-76 marine fuel).

Solazyme currently works with Chevron, UOP Honeywell, and additional industry leading refining partners, to produce this renewable diesel for ships, as well as the Solajet renewable jet fuel for both military and commercial application testing.

[Photo: United Airlines and Solazyme representatives during the presentation of Monday's pioneering flight.]