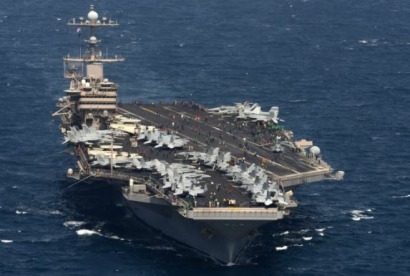 The agreement, signed with Queensland Premier Annastacia Palaszczuk, is part of a pilot U.S. initiative to help the Navy reduce its reliance on petroleum.

According to a statement on the Queensland government's website, the state hopes the deal will advance its hopes to become an Asia-Pacific biofuel hub and foster a $760 million "export-oriented" biofuels sector.

“This is a huge vote of confidence in our developing biofuels industry and puts Queensland in the box seat to supply the Pacific fleet,” Palaszczuk said.

“The partnership we have signed with the US Navy underlines the huge potential to build a new industry that will make Queensland the biofuel hub of the Asia Pacific," she continued. “I have long been talking about the need to diversify our economy, create new industries, and lock in the next wave of long-term, export-orientated job opportunities.

“The signing of this partnership between Queensland and the US Department of the Navy is a giant stride towards reaching those goals,” Palaszczuk added.

The Navy said Queensland will supply the  Asia-Pacific fleet with “drop in” alternative fuel that’s fully compatible with its ships’ petroleum-power systems.

The U.S.  initiative draws its name from the “Great White Fleet” -- battleship squadrons that circumnavigated the globe and launched the U.S. as a sea power at the beginning of the 20th century.

The destroyers Stockdale, Chung Hoon and William P. Lawrence, along with the cruiser Mobile Bay and the fast combat support ship Rainier, are all now running off a biofuel blend made from tallow, or rendered beef fat.

The fuel to be supplied by Queensland will be a mix of 10 percent beef tallow with conventional petroleum.

The Navy tested a 50-50 blend fossil fuel, algae oil and waste cooking oil during its Rim of the Pacific exercise in 2012, but concluded that the the tallow biofuel is a more cost-competitive option.