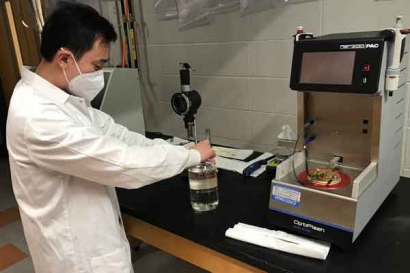 Courtesy of University of Dayton

Large aviation companies like Southwest Airlines are taking notice of the group's work in the DOE’s wet waste flight demonstration project to find a biorefining process to produce sustainable aviation fuels compatible with existing jet engines and capable of supporting net-zero flight. Net-zero is the point where the reduction of carbon emissions balances what's emitted by jet engines

The Proceedings of the National Academy of Sciences published the group's findings the week of March 15, 2021.

Heyne and his team were the first in the nation to establish formal recommendations for the prescreening of alternative aviation fuels for their viability to enter the ASTM International testing program.

Through ASTM International, formerly known as American Society for Testing and Materials, more than 30,000 people from 150 countries create and update standards driven by the expertise and judgment of industry, government, academic, trade and consumer groups experts, among others. NREL advances the science and engineering of energy efficiency, sustainable transportation and renewable power technologies, and provides the knowledge to integrate and optimize energy systems.

"If our refining pathway is scaled up, it could take as little as a year or two for airlines like Southwest to get the regulatory approvals they need to start using wet waste SAF in commercial flights," said NREL scientist Derek Vardon, lead author of the paper. "That means net-zero-carbon flights are on the horizon earlier than some might have thought."

The team's fuel from food waste resulted in a 165% drop in net carbon emissions compared to fossil jet fuel, not only because it's cleaner, but also because the process removes millions of tons of food waste from landfills nationwide where it would produce methane, a greenhouse gas over 20 times more potent than carbon dioxide.

Previous research showed producing fuel from wet waste is possible but, until now, did not show how such fuel could meet ASTM International’s fuel property requirements. Several large U.S. airlines already are using sustainable aviation fuels but still are on the quest to find low-carbon versions in development by the NREL team to help meet their environmental goals.

The group aspires to someday blend up to 70% of a version of its sustainable aviation fuel with conventional jet fuel.

“Our SAF route is not a silver bullet,” Vardon added, “but as a piece of the puzzle it could make a significant dent in an industry notoriously hard to decarbonize.”